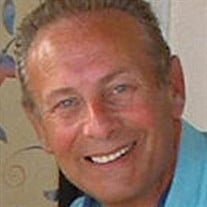 Jeffrey Barton Carlin, who passed away at the age of 75-years-old on July 6, was a throwback to a different era when a man might wear a perfect suit, walk up to you in a bar, and say, “Here’s looking at you, kid.” Part of what made Jeff the ultimate embodiment of midcentury elegance and cool was his vibrant soul and hunger for knowledge. He was a true student of history including aviation, the military, the New York Yankees, and classic movies. But he wasn’t just a reader, Jeff lived life — and he put his studies into practice. Jeff was a man who moved all across this country including his hometown of the Bronx, Vermont, and Maine. Ultimately, Jeff was a Hoosier. He knew how to sail boats, dive the depths, shoot guns, raise huskies, and fly millions of miles. Jeff could navigate to port in a storm, find the best restaurant in a slew of cities, cut through any airport, face off with predatory fish, and beat anyone at “Jeopardy,” which was one of his favorite shows. Jeff was also a software pioneer and entrepreneur who owned his own company, BMSi Partners, which developed programs for oncologists. He wore many hats, but, by far, Jeff was most proud of his role as a family man. He leaves behind his beloved wife, Christine, with whom he enjoyed a storybook marriage that lasted nearly three decades, and two wonderful children, Ben and Melissa. Most importantly, Jeff was a grandfather to Sam, Jack, Gabe, and Molly. He was also a big brother to Neil, Peter, and Jane. There were no bounds to Jeff’s love. Along with the support and care he provided to his immediate family, Jeff was also a devoted uncle to Amber, Hunter, Matt, Shelby, Austin, Marilyn, and Antonio. He was a source of strength as an in-law to Mike, Jessica, Carole, Martha, Greg, Gloria, Sarah, and Alex. Jeff was also a true friend to his “goombahs” and everyone else who had the privilege of knowing him. He was buried on July 12 at Beth David Cemetery in Elmont, New York surrounded by some of the many who loved him including his mother, Natalie, and his grandparents. When Jeff told you to, “straighten up and fly right,” you knew he meant it and that he knew from experience. Everyone who met him learned from and benefited greatly from his presence. We will think of him every time we enjoy a lobster, cheesecake, film, sunset, ball game, or even a bourbon. Donations in Jeff’s memory can be made to the American Cancer Society or Northern Lights Sled Dog Rescue of Indianapolis. As Jeff’s wife said at his funeral, he didn’t just give us good memories, he made our lives grand. He was the exemplar of the old Jewish cheer that we now use to send him off, L’Chaim, or, ‘To Life.’” We will miss him terribly. Allen Funeral Home and Crematory have been entrusted with the local arrangements. Online condolences, photos and memories may be shared with family and friends at www.allencares.com

The family of Jeffrey Barton Carlin created this Life Tributes page to make it easy to share your memories.

Jeffrey Barton Carlin, who passed away at the age of 75-years-old...

Send flowers to the Carlin family.