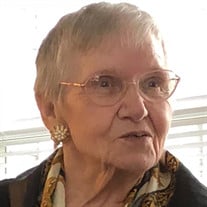 Joeann Sue (Miller) Like, 84, of Bloomington passed away Wednesday, August 25, 2021, at the Hospice House in Bloomington. Born on April 8, 1937, in Washington, Indiana, she was the daughter of Clyde Miller and Ethel (White) Miller. She was an artist and helped develop the Woody Hatchet character for Washington High School while she was a student there. After high school, she worked as a hospital aide and continued her artistic pursuits through painting and quilting. She also enjoyed clowning and entertained people of all ages with her characters, Lady Bug and Yard Sale Annie. She married John Like on August 15, 1964. Later in their lives, the couple spent time in several communities around the state as John pursued his vocation as a Methodist minister. They retired to Linton, and John preceded her in death in September 2007. She was also preceded in death by two sisters, Georgia and Bernice, and two brothers, Lawrence and Clyde. She is survived by a son and daughter-in-law, Joey Like and Penny Reid of Bloomington, Indiana, and a niece, Rhoda Ackley of Ocala, Florida. She had lived at Glenburn Home in Linton and at Bloomington Nursing and Rehab and Golden Living in Bloomington. Most recently she had resided at Evergreen Village in Bloomington. She made friends wherever she went and will be greatly missed. Graveside services will be held at 2:00pm Monday August 30, 2021 at Sugarland Memory Gardens in Washington, Indiana. Allen Funeral Home and Crematory have been entrusted with arrangements. Online condolences, photos and memories may be shared with family and friends at www.allencares.com

Joeann Sue (Miller) Like, 84, of Bloomington passed away Wednesday, August 25, 2021, at the Hospice House in Bloomington. Born on April 8, 1937, in Washington, Indiana, she was the daughter of Clyde Miller and Ethel (White) Miller. She was... View Obituary & Service Information

The family of Joeann Sue (Miller) Like created this Life Tributes page to make it easy to share your memories.

Joeann Sue (Miller) Like, 84, of Bloomington passed away Wednesday,...