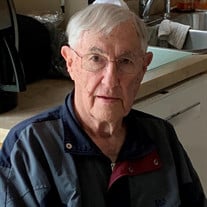 John R. Briles, 89, of Bloomington passed away on Sunday, August 8, 2021 at home with family. He was born on June 13, 1932 in Greene County, Indiana, the son of Austin and Ada (Strauser) Briles. John was a 1950 graduate of Solsberry High School and attended Indiana University. He married the love of his life Dolores Calhoun on July 21, 1957 in Weedman, Illinois. They were happily married sixty-one years. John was a member of the Arlington United Methodist Church where he was very involved and served on several church boards and committees. John was very proud to have served 4 years in the United States Air Force. He spent 3 of those years in Germany. He was also a member of the American Legion Post 18 in Bloomington. He worked for RCA for over 35 years and was the Superintendent of Manufacturing before retiring in 1989. He also worked hanging wallpaper on the side in the Bloomington area most of his life. John enjoyed golfing, traveling, spending time socializing with his neighbors. He was known as the mayor of his neighborhood. He loved his family and especially loved spending time with his grandchildren. He will be greatly missed by all his family and friends, and church community. John is survived by two sons, Kevin (Terri) Briles and Craig (Marci) Briles both of Bloomington; his grandchildren Travis Briles; Joshua Briles; MacKenzie (Trey) Smith; Benjamin Briles; Nicholson (Ashlan) Briles; Maxwell Briles; Jonathan Briles and Brandi (Shawn) Langley; four great grandchildren, Marley Briles; Nick Langley; Brenna Langley and Ryan Langley; and several nieces and nephews. John's niece, Millie Briles, cared for John during his extended illness. She played a vital role in keeping John active and was a true asset to John and the family. He was preceded in death by his parents, his wife Dee; his two brothers, Charlie and Edgar Briles; and two sisters, Martha Loder and Luella Harper. A funeral service will be held at 11:00am Friday August 13, 2021 at the Arlington United Methodist Church in Bloomington. With Pastor Rose Sparks officiating. Burial will follow at Valhalla Memory Gardens. A visitation will be held from 5:00pm to 8:00pm Thursday, August 12, 2021 and Friday from 10:00am to service time both at the Arlington United Methodist Church. Memorial contributions may be made to the Arlington United Methodist Church. Allen Funeral Home and Crematory have been entrusted with arrangements. Online condolences, photos and memories may be shared with family and friends at www.allencares.com

John R. Briles, 89, of Bloomington passed away on Sunday, August 8, 2021 at home with family. He was born on June 13, 1932 in Greene County, Indiana, the son of Austin and Ada (Strauser) Briles. John was a 1950 graduate of Solsberry High School... View Obituary & Service Information

The family of John R. Briles created this Life Tributes page to make it easy to share your memories.

John R. Briles, 89, of Bloomington passed away on Sunday, August...

Send flowers to the Briles family.