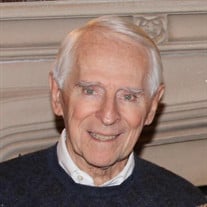 John D (Jack) Mulholland of Bloomington, Indiana passed away on December 23rd surrounded by his wife Pat, of 66 years, his three daughters, and his dog Teal. Jack was an Eagle Scout whose life embodied the values of the Boy Scout oath – he was trustworthy, loyal, helpful, friendly, courteous, kind, obedient, cheerful, thrifty, brave, clean and reverent. Jack grew up in Malone, N.Y., graduated from Clarkson University and received his MBA from the University of Michigan. He was an accomplished trumpet player and played in the Army band while serving his country during World War II. At Clarkson he played professionally in Dance and Jazz bands. As a member of the Michigan Marching Band, he performed at the Rose Bowl Parade. Jack was a CPA and served in a variety of corporate financial roles from New York to Dayton, from Evansville to Hawaii before settling in Bloomington to become the Treasurer of Indiana University. He was active in the National Association of College and University Business Officers and served as president in 1991. Jack was a baseball fan, especially a New York Yankees fan, and traveled the country with his friends visiting Major League ballparks ranking the hot dogs along the way. He loved to play tennis and golf and laugh at clean comedy. He was proud of the hole in one he shot at Pinehurst No. 2. He was an avid IU sports fan, supporting both the men’s and the women’s teams. He was known for his abilities on the pool table and enjoyed teaching his grandchildren the finer points of bank shots. Jack gave back freely to his community. He was the first Executive Director of the Community Foundation of Bloomington and Monroe County and served on the board for many years. He was president of the Theater Circle, on the board of the Brown County Playhouse, president of both the University Club and Meadowood Resident Council. In addition, he served as the treasurer for Meals on Wheels and Habitant for Humanity. He also enjoyed teaching accounting classes in the Kelley School of Business. Jack’s true love was his family (and crème brulee). Jack and Pat raised three amazing daughters: Gail Ringwalt of Fishers, Indiana, Joyce St. Clair (Sean) of River Forest, Illinois and Wendy Moyle (Shep) of Fort Wayne, Indiana. He was a wonderful “Grandpa Jack” to his seven grandchildren: Michael Ringwalt of Indianapolis, Stephanie Graham-Helwig (Ben) of San Francisco, Meredith St. Clair of Chicago, William St. Clair of Chicago, Madison Moyle of Seattle, Chase Moyle of Boston, and Maxton Moyle of New York City. In lieu of flowers, the family prefers donations be made to the Jack Mulholland Endowment Fund at the Community Foundation of Bloomington and Monroe County to support local charities in perpetuity at https://www.cfbmc.org/donate-now/ Allen Funeral Home and Crematory, 4155 S. Old State Road 37, Bloomington have been entrusted with arrangements. Online condolences, photos and memories may be shared with family and friends at www.allencares.com

John D (Jack) Mulholland of Bloomington, Indiana passed away on December 23rd surrounded by his wife Pat, of 66 years, his three daughters, and his dog Teal. Jack was an Eagle Scout whose life embodied the values of the Boy Scout oath &#8211;... View Obituary & Service Information

The family of John (Jack) D. Mulholland created this Life Tributes page to make it easy to share your memories.

Send flowers to the Mulholland family.