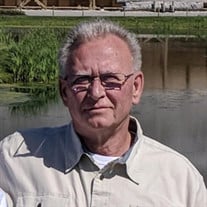 John A. Newlin, 69, of Bloomington, passed away on Tuesday, April 20, 2021 at Methodist Hospital. He was born on May 10, 1951 in Monroe County; the son of John S. and M. Joan (Hacker) Newlin. John worked in the concrete business for 35 years. During his career, he worked for Roger’s Group, Robinson Block and Concrete and Prairie Group. John also spent time in the construction business, having built custom homes and was a member of the Homebuilders Association. He loved working and had a passion for his career. John was a man of faith, who ministered and was a song leader at Sander’s Pentecostal Church. He was a caring individual who enjoyed helping those around him, attending car shows, and traveling with his wife, Sharon, especially to Gatlinburg, Tennessee. He enjoyed woodworking and was an avid collector of knives and guns. John’s most cherished time was over the course of the last 10 years as a result of becoming a bi-lateral lung transplant recipient. John is survived by his wife of 50 years, Sharon (Douglas) Newlin; children, Janel (Matt) Balla and Brian (Christina) Newlin; grandchildren, Presley Roll, Isaac Newlin, Caitlyn Newlin, and Jayden Newlin; and father, John S. Newlin. He was preceded in death by his mother, M. Joan Newlin; and sisters, Betty Spears and Sherry Newlin. Visitation will be held from 4:00 p.m. to 8:00 p.m. on Friday, April 23, 2021 at Sander’s Pentecostal Church, 6490 S. Fairfax Road, and again from 11:00 a.m. until 12:00 p.m. on Saturday, April 24, 2021. A funeral service will be held at 12:00 p.m. on Saturday, April 24, 2021, at the church. Burial will follow at Hanson Cemetery. John’s family would like to encourage others to register to become an organ donor, registration cards and information will be available at the church in John’s memory. Allen Funeral Home and Crematory, 4155 S. Old State Road 37, Bloomington have been entrusted with arrangements. Online condolences, photos and memories may be shared with family and friends at www.allencares.com

John A. Newlin, 69, of Bloomington, passed away on Tuesday, April 20, 2021 at Methodist Hospital. He was born on May 10, 1951 in Monroe County; the son of John S. and M. Joan (Hacker) Newlin. John worked in the concrete business for 35 years.... View Obituary & Service Information

The family of John A. Newlin created this Life Tributes page to make it easy to share your memories.

John A. Newlin, 69, of Bloomington, passed away on Tuesday, April...

Send flowers to the Newlin family.