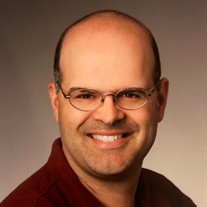 Dr. John Wrasse, 53, of Bloomington, collapsed while exercising at his home on February 13, 2021. He was surrounded by his immediate family at the time he fell ill. Despite heroic efforts to revive him, John tragically passed away a short time later at IU Health Bloomington Hospital. John Douglas Wrasse was born August 6, 1967 to Larry and Nancy (Lambert) Wrasse, in Lincoln, Nebraska. As soon as he got his first bicycle, John was out riding on Lincoln’s extensive trails system. He pursued cycling with a passion until the very hour of his death. John graduated from Northeast High School in Lincoln in 1985 where he was a member of the debate team and National Honor Society. In 1989 John graduated from the University of Nebraska, Lincoln, with a Bachelor of Journalism in Advertising degree. While in college John enjoyed working at Cycle Works Bike Shop. John moved to Bloomington, Indiana, in 1991 and began a career working at Indiana University. He started in the IU Bookstore, then moved to the History department, where he met his future wife Lisa (Kapper). John then worked for the MBA program and the College of Arts and Sciences Recorder’s office, while simultaneously pursuing a second Bachelors degree in Chemistry and completing course work to apply to medical school. John continued his love of cycling, working part-time for the Bloomington Bicycle Garage and riding in the Hilly Hundred and with the Bloomington Bicycle Club. John’s broad ready smile, quick wit, high energy, and work ethic made a lasting impression in every role he held. John and Lisa were married in 2000 at St. Charles Borromeo Catholic Church in Bloomington, and went on to have two daughters, Anna and Lucy. John was a much beloved and devoted father and husband. The family loved walking their dogs, cycling, and traveling together. John also took great glee in chasing squirrels out of his bird feeders, relished making his morning coffee, and loved telling dad jokes. He had a great appreciation for music, from Led Zeppelin to Anna Wrasse, and he was learning to play guitar. John possessed a relentless desire to make the world a better place and loved keeping up with news, listening to National Public Radio and reading the morning paper. He loved nature and had a particular fondness for the Rocky Mountains. His zest for life and concern for others was unparalleled. At age 35 John became a first year med student on the IU School of Medicine Bloomington campus. John was a non-traditional student, being a good deal older than his classmates. He often later said his years of life experience, the persuasion skills learned in Advertising, and the fine motor skills he honed as a bike mechanic helped him greatly in his work as a physician. John graduated from the IU School of Medicine in 2005 where he was awarded an Indiana Primary Care Scholarship. He completed his residency in Pediatrics at the University of Iowa Children’s Hospital where, in 2007, he was awarded the Sarah K. Riesz Award in recognition of quality medical care and establishing a caring relationship between the physician and the child’s family. In 2008 Dr. Wrasse returned to Bloomington and began his Pediatrics practice with Southern Indiana Pediatrics (now Riley - IU Health) where he had done clinical rotations as a medical student. John first worked in the Bedford clinic, where he learned much from his mentor Dr. George Sorrells. John then moved to the Arlington Road clinic in Bloomington upon its opening. In 2012 John began teaching clinical pediatrics to students in the IU School of Medicine, and in 2017 he was promoted to Adjunct Clinical Associate Professor of Pediatrics. John loved working with students and treasured the opportunity to pass on what he had learned. Throughout John’s career he was a tireless resource for his patients and strove to help them achieve health in every way. He had boundless energy, patience and compassion for the children he served. John is survived by his loving wife Lisa, daughters Anna and Lucy, mother Nancy Dyas, father Larry Wrasse, stepfather Hess Dyas, and sisters Julie and Becky and mother in law Anne Kapper. He was preceded in death by his father in law Bill Kapper. The family wishes to thank John’s patient families and colleagues who have reached out to share their memories of how he so deeply touched their lives. A Mass of Christian Burial will be held at St. Charles Borromeo Catholic Church on Monday, February 22nd at 11AM. Due to the ongoing pandemic there will be no visitation. Instead, a celebration of life will be held when conditions allow. In lieu of flowers, memorial gifts may be made to IU School of Medicine to the John D. Wrasse, M.D. Memorial Scholarship. This newly created endowed scholarship will benefit non-traditional medical students in perpetuity, helping individuals like John pursue their dreams of becoming healers after a gap between undergraduate and medical education. Please make checks payable to: IU Foundation/Wrasse Memorial Scholarship and mail to IU Foundation; PO Box 7072; Indianapolis, IN 46207-7072. Indicate “In memory of John Wrasse” on the memo line. Allen Funeral Home and Crematory 4155 South Old State Road 37 is handling the arrangements and online condolences, photos and memories may be shared with family and friends at www.allencares.com

Dr. John Wrasse, 53, of Bloomington, collapsed while exercising at his home on February 13, 2021. He was surrounded by his immediate family at the time he fell ill. Despite heroic efforts to revive him, John tragically passed away a short time... View Obituary & Service Information

The family of Dr. John Wrasse MD created this Life Tributes page to make it easy to share your memories.