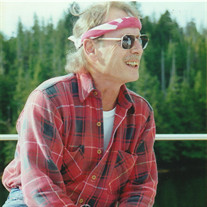 Jon Mack Pinney, 84, of Bloomington, Ind., died Tuesday, Jan. 18, 2022, at IU Health Bloomington Hospital following a heart attack. He was born June 4, 1937, in Huntington, Ind., to Max F. and Evelyn A. Pinney. In 2020, he married his longtime partner, Jennifer Combs, at their cabin near Lake Monroe; she survives alongside their loyal Shih Tzu, Mitzi. Jon wore many hats in life, though he was better known to have a rolled bandana perched on his head. After graduating Huntington High School in 1955, Jon joined the Navy, where he toured the Mediterranean aboard the U.S.S. Intrepid and “saw the world on Uncle Sam’s dime.” He was employed broadly, with jobs ranging from International Harvester purchasing agent to microfilm technician; he also coached a champion youth boxing team in Fort Wayne, Ind. After moving to southern Indiana in 1980, he became known for his art, wood carvings that include totem poles, masks, and his handcrafted Brown County log cabin. A collector and hobbyist, Jon never went long without a project. His red Corvette is the most recent evidence of his lifelong enthusiasm for cars, motorcycles, and boats. He was proud of his 52-year membership to Alcoholics Anonymous. He had a love and knack for animals and plants, serving three meals a day to the birds that flocked to his back porch and tending to the many dozens of flowers on his deck. Against this serene backdrop, he told the most engaging stories and entertained his wildest dreams. Additional survivors include his first wife, Norma, and their children: son Scott (Sandy) Pinney of Huntington, Ind., and daughters Melissa (Dean) Shaffer of New Haven, Ind., and Stephanie (Jeff) Stephen of Angola, Ind.; a brother, Jim D. Pinney, of New Mexico; eight grandchildren, seven great-grandchildren, three nephews and a niece; and countless friends from all walks of life. He was preceded in death by his parents and his second wife, Sharice. A celebration of life will be held at 3 p.m. Friday, January 28, 2022 at Allen Funeral Home and Crematory, 4155 S. Old State Road 37, Bloomington. Visitation will be held from 1:30 p.m. to service time. Online condolences, photos and memories may be shared with family and friends at www.allencares.com. Memorial donations may be made to Wheeler Mission or the Brown County Humane Society via the funeral home as well.

The family of Jon Mack Pinney created this Life Tributes page to make it easy to share your memories.

Send flowers to the Pinney family.