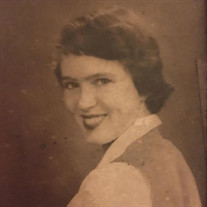 Judith Ann Donnelly died Monday night, January 18, 2021 after suffering a Hemorrhagic Stroke at 83 years of age. She is survived by her four children, Daniel Gill (Janet), Timothy Donnelly (Cathy), Kathleen Donnelly and Mary Strickland. All good Irish names. Seven Grandchildren, Heather Rose, Danielle Gill, Nathalie Podgorsky (Mike ), Keely Tober (Steven Matthis), Sarah Foy (Michael), Cara Donnelly and Ryan Tober. Four Great Grandchildren, Isabel Watts, Wesley Foy, Avery Podgorsky and Evelyn Foy. She is preceded in death by her mother, Elizabeth P. Mullen (who immigrated to USA from Ireland at the age of 11 with her sister Mary age 16) and her daughter Margaret Paul who died at birth. Judi was an Independent, Strong Willed, Feisty Irish Women and Proud of it. She was very proud of her Irish Heritage. She was fearless and enjoyed traveling the country, oftentimes alone. In her later years, she was able to fulfill her lifelong dream of visiting Ireland where she was welcomed by many cousins. Her family was extremely important to her and she always made sure to keep in touch with family members, near and far. She was a seeker of Knowledge and Truth and as you can see by her photo a 'looker' to boot ! Judi never met a stranger, she could speak to anyone and surely made a lasting impression Well versed and a Poet. She wrote her epitaph in her book of poems. Epitaph This life was 'er bitter fought And truth 'ner found, but ever sought It helps my heart, the world to know, Because of it, I’m glad to go! by Judi Donnelly Rest in Peace my Dear Irish Mother.

The family of Judith Ann Donnelly created this Life Tributes page to make it easy to share your memories.

Send flowers to the Donnelly family.