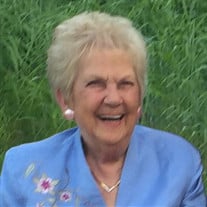 June Rife (née Crandall), resident of Anderson, IN, died peacefully at Rawlins House and Fall Creek Retirement Village in Pendleton, IN on December 18, 2020 at the age of 82. June is survived by her daughter Melanie Lucroy (husband, Michael Lucroy); grandchildren, Madeline and Matthew Lucroy; and brother Gaines Frances “Jack” Crandall Jr., all of Anderson, Indiana. She is predeceased by her husband Cecil ‘Boyd’ Rife, father Gaines Francis ‘Jack’ Crandall, mother Kathryn Crandall (née Burns), her sisters Lois Jane Lunsford and Dorothy Bowman, and her brother Robert Lee Crandall. June was born June 6, 1938 in Indianapolis, Indiana. As a child, she moved with her family to Oregon and later California. They returned to Indiana in 1945 where she lived for the rest of her life. June was a 1956 graduate of Bloomington High School. She and Boyd were married December 17, 1958. After graduation, June began her career at Indiana Bell Telephone. She started as a long-distance operator, working her way through the ranks and retired as a supervisor in the Residential Service Office in 1991. June and Boyd traveled frequently eventually purchasing a motor home. Annual trips to Tucson, Arizona were a highlight. They loved the history and visiting with their nephew Marc Lunsford and his family. June particularly loved Native American history and cared deeply for them. She visited reservations on her travels and collected Native American art and jewelry. Their trekking took them throughout the United States and Canada. While in Bloomington, she was an active member of First Assembly of God Church where she taught the Daisy class. After retirement, her time was filled with volunteer work. She began volunteering at the Bloomington Hospital along with her mother. She spent years working at the Opportunity House in Bloomington, serving as their director. She cared for her husband at home until he succumbed to Alzheimer’s disease in 2012. June lived most of her life in Bloomington, moving to Lafayette, Indiana to be near her grandchildren in 2004. She moved again in 2012 to Anderson, Indiana to be close to her family. Visitation for June will be held Monday, December 21, 2020 form 1:00PM until 6:00PM at Allen Funeral Home and Crematory 4155 South Old State road 37. In lieu of flowers please make a donation to American Indian Services (https://americanindianservices.org/). Online condolences, photos and memories may be shared with family and friends at www.allencares.com

June Rife (née Crandall), resident of Anderson, IN, died peacefully at Rawlins House and Fall Creek Retirement Village in Pendleton, IN on December 18, 2020 at the age of 82. June is survived by her daughter Melanie Lucroy (husband, Michael... View Obituary & Service Information

The family of June Rife created this Life Tributes page to make it easy to share your memories.

Send flowers to the Rife family.