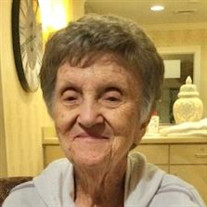 Kathleen "Katie" S, Sinn, 88, passed away Wednesday, September 15, 2021. She was born October 12, 1932, in Bloomington, the daughter of Earl and Daisy Fern (Baugh) Webb. A graduate of Bloomington High School, she had been employed by Sarkes... View Obituary & Service Information

The family of Kathleen "Katie" S. Sinn created this Life Tributes page to make it easy to share your memories.

Send flowers to the Sinn family.