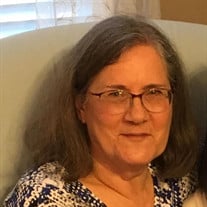 Katrina (Trina) Mescher died unexpectedly from a heart attack at home late Friday morning, January 29, 2021, with her husband Tony at her side. Born January 9, 1950, in Columbus, Ohio, Trina was the middle child of Bill and Sally Steck of Westerville, Ohio. She graduated in 1968 from Westerville High School and four years later from Otterbein College with a degree in Early Childhood Education. While pursuing postgraduate work in children’s reading development at Ohio State University, she met through mutual friends a doctoral student in biology, Tony Mescher. Trina and Tony were married two years later, on August 30, 1975, one day after Tony’s graduation, beginning a successful and mutually supportive 45-year partnership. She served as a teacher at St. Mark’s Nursery School and Kindergarten in Bloomington for 27 years, retiring in 2017. Trina loved a simple life and retained a childlike wonder of the natural world. She never failed to stop and admire sunsets from her front window, falling snow, the subtle colors of lichens, beech trees in winter, and sycamore trees year-round. In retirement her daily joys invariably began with a large café au lait while completing the NYT crossword and usually ended with a healthy dose of laughter with Stephen Colbert. An excellent cook since childhood, she constantly enjoyed trying new recipes with little change in her specialty of pie making. Trina was a passionate reader, especially of fiction, with works by Toni Morrison, Kate Atkinson, and Marilynne Robinson among her many favorites. Central to Trina’s life was her faith as expressed here by the St. Mark’s church community with whom she was deeply involved, including longtime service as the Co-Lay Leader. Trina’s faith called her to action, and she was an early volunteer in Bloomington with the Community Kitchen, then still located at Monroe County United Ministries; the Interfaith Winter Shelter; and the Hoosier Hills Food Bank, where she served on the Board of Directors for many years until her passing. Passionate about social justice, Trina worked to educate and make more inclusive the many communities to which she belonged. As was said of someone she admired greatly, she would wish to be remembered simply as a good and decent person, who saw suffering and tried to help heal it, who saw wrong and tried to help right it. Trina’s greatest joys were motherhood and the pride she felt for her two sons, by whom she is survived: Ben and Jeremy Mescher. Along with Tony, and Jeremy’s wife Mariah Briggs Mescher, other survivors include her sister, Gretchen Horstman and her husband David of Columbus, Ohio and her brother Fred Steck, his wife Marlene Borschel, and their son Will Steck of Worthington, Ohio. A service at St. Mark’s United Methodist Church celebrating Trina’s life will be scheduled later this year. Memorial contributions honoring her life may be made to the St. Mark’s Nursery School and Kindergarten Scholarship Fund. Allen Funeral Home and Crematory 4155 South Old State Road 37 is handling the arrangements and online condolences, photos and memories may be shared with family and friends at www.allencares.com

Katrina (Trina) Mescher died unexpectedly from a heart attack at home late Friday morning, January 29, 2021, with her husband Tony at her side. Born January 9, 1950, in Columbus, Ohio, Trina was the middle child of Bill and Sally Steck of... View Obituary & Service Information

The family of Katrina "Trina" Mescher created this Life Tributes page to make it easy to share your memories.

Send flowers to the Mescher family.