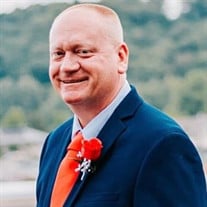 Kelly Leon McGill, 49, of Bloomington passed away on Monday, September 20, 2021 at the Monroe Hospital in Bloomington. He was born on August 9, 1972 in Bloomington, Indiana the son of James Franklin and Joyce Marie (Williams) McGill. Kelly was a 1991 graduate of Bloomington High School South. After high school he went to work at Macy’s Grocery Store in Bloomington, and then he went to work as a Technician for Cook Medical Inc for 28 years. Kelly married Tammy on July 4, 2020 in Nashville, Indiana He was a member of Jeep’s Only in Ellettsville and The Brown County Jeepers, he was an avid outdoorsman, he enjoyed cruising in his Jeep, hunting, fishing, he had a love for sports, especially the Colts, he was a Cubs fan but became a Reds fan instead after marrying Tammy, he also enjoyed IU. Kelly loved his family and enjoyed spending time with his family and friends. He will be greatly missed by all who loved and knew him. Kelly was survived by his wife, Tammy McGill of Bloomington; his children, Cassidy McGill of Bloomington; Ashley (Ricky) Sanchez of Spencer; Nick (Samantha Francy) Hawkins of Omaha, NE; three grandchildren, Leelan; Lennox and Layton; three brothers, Frank McGill; Mike McGill; Rick (Tanette) McGill all of Bloomington; two nieces, Darby and Sierra; one nephew, Joseph; and his aunts uncles and cousins. He was preceded in death by his parents. A funeral service will be held at 4:00pm Saturday, September 25, 2021 at the Allen Funeral Home 4155 S. Old St Rd 37 Bloomington. Visitation will be held from 1:00pm to service time Saturday at the funeral home. Cremation Rites will be accorded after the service. Allen Funeral Home and Crematory have been entrusted with arrangements. Online condolences, photos and memories may be shared with family and friends at www.allencares.com

Kelly Leon McGill, 49, of Bloomington passed away on Monday, September 20, 2021 at the Monroe Hospital in Bloomington. He was born on August 9, 1972 in Bloomington, Indiana the son of James Franklin and Joyce Marie (Williams) McGill. Kelly was... View Obituary & Service Information

The family of Kelly Leon McGill created this Life Tributes page to make it easy to share your memories.

Kelly Leon McGill, 49, of Bloomington passed away on Monday,...

Send flowers to the McGill family.