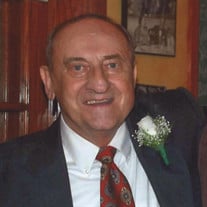 Lawrence Stephen Jackowiak passed away on July 30, 2020 at home surrounded by his family. He was born on July 8, 1935 in Chicago IL to Stephen and Cecilia (Ciaciuch) Jackowiak. He attended St. Mary of the Perpetual Help grammar school where he lovingly referred to Sister Mary Knuckles who taught him “a thing or two”. He attended Weber High School where he received a scholarship to play basketball. He enlisted in the Army in 1957 where he was trained as a radio operator and proudly served his country. Upon his honorable discharge from the service he joined Burroughs Corporation serving the greater Chicago area, fixing adding machines and typewriters. There he met the love of his life Joanne Pohl at the State Bank of Clearing. They married on October 27, 1962. He was employed as a computer engineer for Control Data corporation where he installed the 6600 computers at sites across the country, including being on the ground check-out crew for the first Apollo moon landing, he also worked on the first installations of the main frame computers for the Weather Bureau, at the Atomic Energy Lab in Los Alamos N.M, at Argon National Labs in Chicago, and he was employed for 22 years with Indiana University Wrubel Computing Center maintaining their computer systems which brought the family to Bloomington in 1971. He was a member of St. Charles Catholic Church for 47 years where he participated in the men’s club and many church and school projects. He was a Knights of Columbus member, volunteered for St. Vincent DePaul society, worked with Area 10 Agency on Aging, and was active for five years delivering Meals on Wheels. He was an avid sports fan and the family always said he was a frustrated arm-chair coach. Larry is proceeded in death by his parents. He is survived by his wife of 57 years, Joanne M. Jackowiak. His sharp mind and wonderful sense of humor was passed on to his devoted children: Edward (Reena Singh) Jackowiak of Boston, MA, Laura (Brendan) Smith of Tomah, WI, Lynda (David) Webb of Madison, WI, Catherine (Joe Bryan) Jackowiak of Bloomington, IN, and Joseph Jackowiak of Chicago, IL, eight Grandchildren Emilee (Joshua) Combs, Kelly Smith, Daniel and Ellyn Webb, Faye and Jack Bryan, Smita and Maia Jackowiak, His siblings Barbara(Patrick) O’Connor, David (Julie) Jackowiak, Jim Jackowiak, Fr. Tom Srenn and numerous nieces and nephews. A Mass of Christian burial will be held Monday, 11:00am on August 3, 2020 at St. Charles Church in Bloomington, Indiana with viewing at the church at 10:00 a.m. Burial will be at Clear Creek Cemetery following the ceremony. The Mass may be viewed live on the St. Charles Catholic Church, Bloomingon YouTube channel. Due to the current virus restrictions there will be a celebration of life at a later date. The family requests that attendees wear a mask. In lieu of flowers the family requests contributions be sent to the American Cancer Society or St. Charles Catholic school. Allen Funeral Home and Crematory 4155 South Old State Road 37 is handling the arrangements and online condolences, photos, and memories may be shared with family and friends at www.allencares.com. To view the services please go to https://www.youtube.com/channel/UC8UBfQ0_etAQKs0JT7SdLWg

Lawrence Stephen Jackowiak passed away on July 30, 2020 at home surrounded by his family. He was born on July 8, 1935 in Chicago IL to Stephen and Cecilia (Ciaciuch) Jackowiak. He attended St. Mary of the Perpetual Help grammar school where... View Obituary & Service Information

The family of Lawrence Stephen Jackowiak created this Life Tributes page to make it easy to share your memories.

Send flowers to the Jackowiak family.