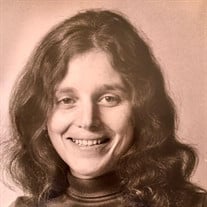 Linda Robert Alis was born in Cambridge, Massachusetts on December 10, 1943, to Parents Abraham Robert and Bess Meltzer Robert, who lived in Roxbury and later in Mattapan, Massachusetts.  At the age of two, Linda lost her mother, whom she adored, to lupus.  Her paternal grandparents were Russian survivors of the Pogroms, and for a time, her paternal grandmother Rose, lived with the family and took care of Linda. Her father remarried and she described her stepmother, Renee Robert, as “quite beautiful.”     Linda started at Dean Junior College in Franklin, Massachusetts, and transferred later to American University in Washington, DC, majoring in political science and international law.  She graduated from American University in 1965 and many years later, graduated with a master’s degree in Social Work from Indiana University-Purdue University, Indianapolis (IUPUI).    Linda is remembered for many things, including her life stories.  She led a fascinating life that was characterized by bold, personal risks with a variety of people and a keen wit.  Following a brief period at the Fort Bragg army base in Fayetteville NC with her then-husband Steve Alis, Linda moved to Bloomington, Indiana in the late-60s, where she worked for the Courier Tribune, One of Linda’s most harrowing stories as a reporter is her coverage of a Ku Klux Klan rally near Mooresville.    Another story is her journalistic work covering events in Jackson, Mississippi. Just a few days after the Kent State University shootings on May 4, 1970, another tragedy struck historically Black Jackson State College (now Jackson State University).  After an insurrection by local townspeople over a rumor about racial violence, seventy-five heavily armed police and state troopers aimed their weapons at a women’s dormitory on the campus, deploying some 400 rounds that killed two people and injured 12 others.  Herman Hudson, then Chancellor for Afro-American Affairs, telephoned Linda to tell of her about the shootings, explaining that the massacre would not get the same coverage in the white press that Kent State did and asked her to go; she agreed.  In an interview, Linda noted that the only real coverage the story received at the time was by the New York Times, Newsweek magazine, and the Bloomington Courier Tribune.    Linda left Bloomington around 1971 for a year, and then became the treatment director for the Monroe County Foster Home when she returned.  When the home lost its funding, Linda took responsibility for continuing the program out of her own pocket.  She began working as director of social work services at Crestmont, the urban renewal housing project, and saw the 11 children at regular intervals. The community became aware of her work and offered donations.   She sustained contact and offered financial support even as they “aged out.”    Linda also had a penchant for helping the vulnerable, especially the survivors of rape and incest, and she was wisely and bravely attentive to the role of racism and poverty as factors that influenced the lives of the people in the Bloomington community.    “My interest is in empowering victims to become survivors -- real, true survivors,” she said.   She started the Midwest Counseling Center in 1978 and through the years partnered with Dr. Dwight Noble and John Ebling. She worked in private practice as a therapist until her illness in early 2020. Linda often spoke about her respect and love for her many clients and was proud of her connections with them and the work they took on together. She worked in private practice as a therapist until her illness in early 2020.  Linda was a lover of jazz, and of bluegrass music and was a practitioner of Gedatsu Buddhism as taught by her long-time friend, Dr. Kenneth Yasuda. She was a regular at the Runcible Spoon and Mark Pi.  One of her dearest friends was LaVerta Terry, a longtime Bloomington resident and the first Black teacher hired at a Bloomington public school. She lived in Hog Holler for over 40 years and loved to invite her friends to her lake cottage in Brown County, where she presided over many Fourth of July parties.  She is survived by two sisters, Lauren Robert of Nashville, IN and Jill Robert of Charlestown, NH. . .   and a large extended family that includes Donna Barbrick, Tom Henderson, Fred and Joy Bartenstein, David H. Terry, Charlotte Zietlow, Chalmer Thompson, Leon and Jackie Olenick and many other long-time Bloomington residents.  In lieu of flowers Linda supported these organizations with donations: The Nature Conservancy, Southern Law Poverty Center, and Doctors Without Borders. Join us for sharing stories and remembering, Sunday, May 15, 2022 at 2 pm at the Lower Cascades Park, Sycamore Shelter, Bloomington Allen Funeral Home and Crematory 4155 South Old State Road 37 is handling the arrangements and online condolences, photos and memories may the shared with family and friends at www.allencares.com.

Linda Robert Alis was born in Cambridge, Massachusetts on December 10, 1943, to Parents Abraham Robert and Bess Meltzer Robert, who lived in Roxbury and later in Mattapan, Massachusetts.  At the age of two, Linda lost her mother, whom she adored,... View Obituary & Service Information

The family of Linda Robert Alis created this Life Tributes page to make it easy to share your memories.

Linda Robert Alis was born in Cambridge, Massachusetts on December...

Send flowers to the Alis family.