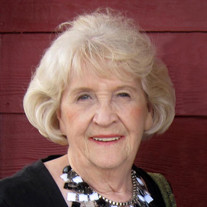 Lorene Fox (nee White) 87 of Bloomington, IN died on July 19, 2020. She was born in Heltonville, IN on August 3, 1932 to Walter and Sarah (Fleetwood) White, the youngest of five children. Born in the depths of the Great Depression, she always dreamed of better times and visiting faraway places. After graduating from Heltonville HS she moved to Bloomington and worked at Sarkes Tarzian. Always adventurous, she lived in Terre Haute, visited New York City and flew to California in the 1950’s to marry Donald M. Fox in Hollywood, a marriage lasting 61 years until Don’s death. Returning in 1961 to be closer to family, she resided in Bloomington the rest of her life. Lorene loved fashion and decorating, sewing many of her own clothes in the early years, and was known for her signature necklaces. She always strove to elevate her own life and those around her, emphasizing education and cleanliness, challenging family with experimental cooking, and perpetually redecorating the family home. After her children left for college, she worked as an administrative assistant for IU in Research and Graduate Development, then Sociology until retirement. Lorene was a dedicated member of Phi Beta Psi charitable sorority, enjoyed soap operas, entertaining, holidays, rides in her convertible, and artistically wrapping Christmas presents. She greatly valued her many friends and neighbors throughout Bloomington. For years, she never stored her Christmas tree but merely redecorated it for each new season, bringing joy to visitors throughout the year. Lorene was preceded in death by her husband Donald, brothers Ray, Olin and Lloyd White, sister Lola Norman, nieces Edna “Edye” Adkins, Letta Mae Purdy and Wilma Wright, nephews Dewey, Dean and David White. Lorene is survived by daughter Melody Fox, son Richard L. (Sonya) Fox, granddaughter Sarah E. Fox, nieces and nephews and their families, Kay (John) Timm, Brenda (Gary) McDonald, Leroy and Bob Norman, Daryl, Dale and Kenny Ray White, Dana Aucoin, Donald (Cynthia) Adkins, Dina (Stephen Finnerty) Adkins, and Jodi Adkins, cousins Carol Bennett, Sherri Sipes, Tony Sipes, and many relatives in the White and Adkins families. Upon her death she had 29 great, 30+ great great and 4 great great great nieces and nephews. The family appreciates the loving care provided to Lorene by Sherry Parks and Trent Shipley, and thanks Shelby and Gretchen Wilson and Nancy Lambert for their exceptional friendship. A Celebration of Life will occur in 2021. Everything Lorene touched in life she left better than she found it, and always looked for ways to be kind to others. You are invited to share a memory or leave condolences at www.allencares.com.

Lorene Fox (nee White) 87 of Bloomington, IN died on July 19, 2020. She was born in Heltonville, IN on August 3, 1932 to Walter and Sarah (Fleetwood) White, the youngest of five children. Born in the depths of the Great Depression, she always... View Obituary & Service Information

The family of Lorene Fox created this Life Tributes page to make it easy to share your memories.

Send flowers to the Fox family.