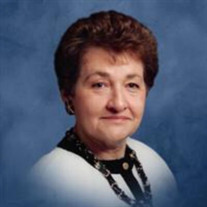 Mabel Ann Metcalf, of Boerne, Texas, passed away on Monday, July 12, 2021, following a brief battle with an acute form of cancer. A visitation will be held at Holt & Holt Funeral Home in Boerne at 6:00 pm on Friday, July 16, 2021. The funeral service will follow on Saturday, July 17, 2021, at 10:00 am at First Baptist Church of Boerne. She will be laid to rest in her childhood hometown of Bloomington, Indiana, where a visitation will be held at Allen Funeral Home from 4:00 pm to 8:00 pm on July 23, 2021, followed by a funeral service at Clear Creek Church at 10:00 am on July 24, 2021. Mabel was born on April 22, 1933, to Ray and Irene Reeves near Bloomington, Indiana. She was known for her quiet, generous personality that loved to laugh and give others good reason to smile. After graduating from Smithville High School, she became a secretary in the Federal Bureau of Investigation which led her to work in the main offices in Washington D.C., and later at the Detroit, Michigan field office. She met Thurston Metcalf in Detroit and the two wed in 1957. She put her career on hold while they raised a family though she did return to work as a secretary for the Southeast Iowa Mental Health Services, in Ottumwa, Iowa, after her children were older. She was always active in the Baptist churches she attended wherever she resided. She enjoyed a variety of hobbies over the years, such as growing flowers, sewing, and various crafts, but her favorite activity was spending time with her family. Mabel is survived by her husband, Thurston; sons Gregory Metcalf (Katy) of Boerne, Barry Metcalf of Topeka, KS, and Randy Metcalf (Tracy) of Jasper, MO; her grandchildren, Lucas Metcalf, Jacob Metcalf, Hannah Wilburn (Ben), Autumn Metcalf, Mileah Metcalf, and Gabriellah Metcalf; two great-grandchildren, Adaline Wilburn and Ivory Wilburn; and her brothers, Stanley (June) Reeves, Ernest Reeves, Marshall Reeves, Millard Reeves, and Marion (Linda) Reeves, who all reside in Bloomington, IN. She was preceded in death by her parents, Ray and Irene Reeves; her sister, Emogene Reeves; her brother, Walder Reeves; and an infant daughter. The family would like to express their gratitude towards the San Antonio Methodist Specialty and Transplant Hospital for their care in her final days, and to all loving friends and family who have shared comforting prayers and supportive wishes during this time.

Mabel Ann Metcalf, of Boerne, Texas, passed away on Monday, July 12, 2021, following a brief battle with an acute form of cancer. A visitation will be held at Holt & Holt Funeral Home in Boerne at 6:00 pm on Friday, July 16, 2021. The funeral... View Obituary & Service Information

The family of Mabel Ann Metcalf created this Life Tributes page to make it easy to share your memories.

Send flowers to the Metcalf family.