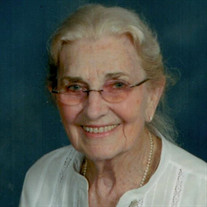 Marcelle M. (Price) Pfenninger, 95, passed away Sunday November 29, 2020 at the IU Health Methodist Hospital in Indianapolis. She was born on April 1, 1925 in Lockport, Louisiana the daughter of Dr. James Albert and Marie (de la Croix) Price, she was one of seven children. Marcelle graduated from St. John’s High School in Plaquemine, LA, and also attended Our Lady of the Lakes Hospital Nursing School and received her RN. Marcelle married John G. Pfenninger on October 12, 1946 in Plaquemine, LA. She was a homemaker but also worked outside the home as an Industrial nurse in the Bloomington area, and as the Nurse for St Charles Catholic School. Marcelle was a member of St. Charles Borromeo Catholic Church where she served many years as a Eucharist minister and was known as a prayer warrior, she was also very involved in several other church activities, she was an original member of the intercessory prayer group that still meets today after forty years, and help start adoration, she served many funeral mass dinners over the years. She was a Hospital Auxiliary Charter Member, served on the board for mental health, was a Red Cross civil defense nurse, she also was a member of the RN Club in Bloomington, We Care President, Tri Kappa Sorority, Girl Scout Leader and American Legion Auxiliary she served over 2000 hours of service and was a Gold Volunteer with mentally ill patients. Marcelle sponsored the education of three orphans in Nigeria. She was a tremendous supporter of an international charity organization Pro Labore Dei. She enjoyed traveling, gardening, feeding the birds, community volunteering, and praying which was her life. Marcelle treasured time with her family, including daughters, Anne Pfenninger of Lafayette; Jeanne (Robert) Childs of New Castle; Margaret (Maurice Salmon) Pfenninger of Strasbourg, France, she enjoyed spending time with her grandchildren Ryan (Tiffany) Scott, Morgane Salmon; and step grandchildren Todd Childs and Jenna (Todd) Neal; and her great grandchildren Lillian Scott and Lathan Boyd, and was also survived by her sister-in-law, Jane (Larry) Carter of Indianapolis; and several nieces, nephews and cousins. She was preceded in death by her parents; husband John; one son John Pfenninger Jr.; a grandson Jacob Pfenninger; five sisters, Sister Mary Louis; Bernice Nesom; Eldridge LeRay; Ora Harroun; Marian Barbier; and her brother James Albert Price . A Mass of Christian Burial will be held at 1:00pm Saturday, December 5, 2020 at the St. Charles Borromeo Catholic Church. With calling from 11:00am to time of service at the church. A graveside service will be held at noon on Monday, December 7, 2020 at the South Mound Cemetery in New Castle, Indiana. In Lieu of flower Memorial contributions may be made to the St. Charles Catholic Church or Catholic Charities. She was known for her prayers, so the family ask that you say a prayer in her memory. The family wishes to thank the caregivers that took such loving care of her. Allen Funeral Home and Crematory have been entrusted with arrangements. Online condolences, photos and memories may be shared with family and friends at www.allencares.com

The family of Marcelle M. (Price) Pfenninger created this Life Tributes page to make it easy to share your memories.

Send flowers to the Pfenninger family.