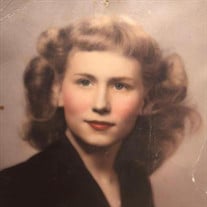 Margaret "Peggy" Houston of Bloomington, In. passed away peacefully in her sleep on October 13, 2021 with family by her side. She was born on March 18, 1930 to James and Rosella McInnes in Evansville, Indiana. Peggy was the second daughter of four, sister Betty, and brothers Robert and Richard. Peggy was known for standing out in a crowd with her ginger red hair, high cheekbones, infectious smile, and sharp wit. She attracted the eyes of Thomas “Tom” Houston, her high school sweetheart, in 1949, and the two were together from then on. Peggy and Tom celebrated 30 years of marriage shortly before his passing in 1982. She studied business and administration at University of Evansville. Although she celebrated her retirement of 25 years at RCA in Bloomington, Indiana, she did not truly retire. A people’s person at heart, she loved giving and helping where needed. She was a devoted caretaker for several families. Peggy also worked for Bloomington Hospital in the Education Department for over a decade. And most notably, she joined Indiana University’s Beck Chapel as a curator, where she enjoyed coordinating hundreds of weddings. When Peggy retired from IU she was 88 years old, one of the oldest working Beck Chapel curators. She was a proud sorority alumna of Lambda Chi Omega Sorority, and member of Bloomington Free Methodist Church. Above all, Peggy was a strong matriarch and loved her family deeply. She was a loving mother to three, daughters Roseanna Lester and Lisa Hardiman and son Richard “John” Houston. She was also a devoting grandmother, spoiling her grandbabies with homemade sweets and warm hugs. Now grown, her grandchildren, Jenny, Jessie, AlliJo, Bobby, Ian, and Keeley miss her dearly, and are grateful for all the loving memories shared with her. Her memory will live on through her prized vegetable stew recipe, flower gardens, and in her wisdom bestowed to friends and family. Graveside services will be held at Garrison Chapel Cemetery, Heilman, Warrick County, Indiana, on Saturday October 30, 2021 at 2:00PM CDT. May her memory continue to be a blessing. Allen Funeral Home and Crematory 4155 South Old State Road 37 is handling private family arrangements and online condolences, photos and memories may be shared with family and friends at www.allencares.com

Margaret "Peggy" Houston of Bloomington, In. passed away peacefully in her sleep on October 13, 2021 with family by her side. She was born on March 18, 1930 to James and Rosella McInnes in Evansville, Indiana. Peggy was the second daughter of... View Obituary & Service Information

The family of Margaret "Peggy" Houston created this Life Tributes page to make it easy to share your memories.

Margaret &quot;Peggy&quot; Houston of Bloomington, In. passed away peacefully...

Send flowers to the Houston family.