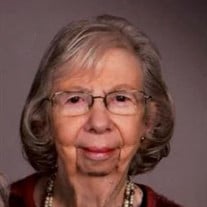 Marilyn “Lyn” Laurine Burleson, 90, of Bloomington, passed away on Saturday, July 10, 2021, at Gentry Park Health Pavilion. She was born on December 29, 1930 in Seattle, Washington; the daughter of Leslie W. and Anna Marie (Lindberg) Johnson. Lyn married Derek Lee Burleson at University Temple in Seattle on July 31, 1955. She graduated from the University of Washington and taught in public schools in Washington state. Lyn continued her education at Teacher’s College at Columbia University, New York City where she obtained a Master’s Degree in Education. She was a member of Phi Beta Kappa and PEO honorary societies. After living in New York for 20 years, Lyn and Derek moved to Bloomington in 1977. She was an administrator at Indiana University in the School of Education until retiring in 1993. Lyn was a member of First United Methodist Church and a 39-year member of the church choir. Lyn and Derek traveled extensively in the US and to countries on six continents. She had a love of music and thoroughly enjoyed the musical opportunities at IU and in Bloomington. Her hobbies included knitting, reading, baking and crossword puzzles. Lyn is survived by her sons, Scott (Linda) Burleson, of Myrtle Beach, South Carolina and Wayne (special friend, Annette) of Amherst, Massachusetts; along with four grandchildren. She was preceded in death by her parents, a brother, Keith, and husband, Derek Burleson. A memorial service will be held at 1:00 p.m. on Tuesday, August 10th, 2021 at First United Methodist Church, 219 E. 4th St. Bloomington. Family will receive friends from 12:00 p.m. until the time of service at the church. Memorial contributions may be made in Lyn's memory to the Shalom Center. Allen Funeral Home and Crematory, 4155 S. Old State Road 37, have been entrusted with arrangements. Online condolences, photos and memories may be shared with family and friends at www.allencares.com

The family of Marilyn "Lyn" Laurine Burleson created this Life Tributes page to make it easy to share your memories.

Send flowers to the Burleson family.