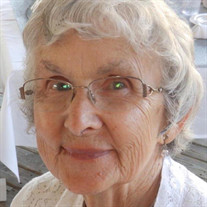 Marjorie Eastwick Crosby, MSN was born September 27, 1931 in New York, NY to Elizabeth Eastwick and the Rev. Milton Eastwick. She was married for 65 years to Dr. John Fulling Crosby, Ph.D., of Bloomington, IN. She is also survived by brother Warren Eastwick of Ludlow, VT, sons Richard A. Crosby of Rushville, IN, Andrew R. (Catherine Zimmer) Crosby of Henrico, VA, Scott D. (Janine Clymin) Crosby of Seattle, WA, grandchildren Vicki Crosby, Ashley Tackett, Nick Crosby, Maya and Julie Crosby and great-grandchildren Kel, Kianna, and Lani Crosby. Marjorie graduated in 1954 from New York City Hospital at Cornell University and was among the first wave of bachelor’s degree level registered nurses in the country. Also, in 1954 -- at her parents’ home in New Jersey -- she met, and soon fell in love, with John. She married John in 1955 and partnered with him in his Presbyterian ministry, moving to Battle Creek, MI to serve with John in his role of founding minister for the First Presbyterian Church there, and later to the First Presbyterian Church of Baldwinsville, NY. While living in Baldwinsville, NY in the late 1960s Marjorie returned to obstetrical nursing, supporting the family while John studied for a new career as a professor. This reinvigorated her professional commitment to comprehensive women’s healthcare. In 1976, Marjorie obtained her MSN in midwifery at Fort Knox, KY. She helped establish The Birthing Center in Lexington, KY. Marjorie was also committed to nursing education, serving as a faculty member and instructor of nursing at Eastern Kentucky University’s School of Nursing. Marjorie and John traveled the country in an RV over the course of many years. They retired to Brewster, MA and later Bloomington, IN, where she worked in a nursing support capacity, as well as a volunteer for Planned Parenthood well into her 70s. Marjorie was a passionate supporter of and volunteer for both the Democratic Party and Planned Parenthood of Bloomington Health Center. She enjoyed playing piano and was a talented organist and singer. She loved family gatherings, especially the Holiday season, and often playing bridge with her friends at Bell Trace in Bloomington. Should you choose to give a memorial gift, her family asks that it be to a charity of your choice, Planned Parenthood of Bloomington, IN or a local hospice organization. She will be missed by all, especially John who remains living in Bloomington. Allen Funeral Home and Crematory 4155 South Old State Road 37 is handing the arrangements and online condolences, photos, and memories may be shared with family and friends at www.allencares.com

Marjorie Eastwick Crosby, MSN was born September 27, 1931 in New York, NY to Elizabeth Eastwick and the Rev. Milton Eastwick. She was married for 65 years to Dr. John Fulling Crosby, Ph.D., of Bloomington, IN. She is also survived by brother... View Obituary & Service Information

The family of Marjorie Elizabeth Eastwick Crosby created this Life Tributes page to make it easy to share your memories.

Send flowers to the Crosby family.