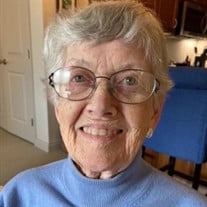 Marjorie M. Kanne of Bloomington, Indiana, died in Carmel, Indiana, March 16, 2022. Born August 1, 1929, she was raised in Mobridge, South Dakota. She was the daughter of Patrick C. Morrison and Mary Jane Morrison who preceded her in death. Also preceding were her sister Jane Morrison Moffatt, and her brother Pat Bunker Morrison. She was a graduate of McMurray College, Jacksonville, Illinois in 1951. She was married to Miles F. Kanne in 1954. They lived in Minneapolis, Minnesota, Park Ridge, Illinois, moving to Bloomington in 1967. Survivors include her husband Miles, her son Roger and wife Caren, her daughter Sandra and husband Phil. Also, surviving are her twin grandsons, Bryan Kanne and Patrick and wife Kari Kanne, and twin great grandsons, Dylan and Jackson Kanne. She was a member of the First United Church of Bloomington, where she taught Sunday School and was a member of several committees. She was a volunteer at the Bloomington Hospital, as well as Meals-On-Wheels. She was a former member of the Board of Directors of the Boys and Girls Club of Bloomington. After living in Bloomington, Indiana for 50 years, she and her husband moved to Carmel, Indiana in 2018. They reside in Woodland Terrace of Carmel, a Senior living center. A private family memorial service will be held at a later date. Cremation Rites have been accorded. The family ask that memorial contributions be made to the Salvation Army in Bloomington or the Bloomington Hospital Foundation. Allen Funeral Home and Crematory have been entrusted with arrangements. Online condolences, photos and memories may be shared with family and friends at www.allencares.com

Marjorie M. Kanne of Bloomington, Indiana, died in Carmel, Indiana, March 16, 2022. Born August 1, 1929, she was raised in Mobridge, South Dakota. She was the daughter of Patrick C. Morrison and Mary Jane Morrison who preceded her in death.... View Obituary & Service Information

The family of Marjorie M. Kanne created this Life Tributes page to make it easy to share your memories.

Send flowers to the Kanne family.