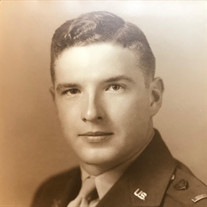 Maurice Biggs, 98, of Bloomington passed away on August 16 surrounded by his loving family. Born October 27, 1921 in Sebree, Kentucky, Maurice was the eldest of three children born to Dr. Paul and Bessie (Hunt) Biggs. He graduated from Evansville Bosse High School. After brief attendance at Evansville College with a major in chemistry and membership in the Indiana National Guard, Maurice was assigned a year of military training in 1941 at Camp Shelby, Mississippi. After war was declared by the United States on December 7, 1941, he continued training at Fort Sill, Oklahoma, where he received commission of Second Lieutenant in 1942. From there he was assigned service at Camp Adair, Oregon to help form the 70th Infantry Division. During leave back in Evansville, he became engaged to Miss Jean Bock. Shortly afterward he was assigned to overseas duty in Europe to General Patton’s 3rd Army, 177th Field Artillery Battalion. During combat he was promoted to Captain. At the end of hostilities in 1945, he returned to Evansville and married Jean Bock on June 14th 1946. They moved to Bloomington in order for her to attend IU where he attained a PhD with a major in Geology and Geophysics. He also began a career in the Indiana Geological Survey where he was appointed head of the Geophysics Section and later Assistant State Geologist. He retired in 1987. He is survived by his four children, Janie Witham (Doug), Don Biggs (Trish), David Biggs (Sandy), and Judy Estridge (Paul). He is also survived by 11 grandchildren, Kyle, Sam (Lydia), and Carly Witham, Charlie Biggs, Casey Konstanski (Caleb), Nick, Holly, and Whitney Biggs (Rob), Mary Ellen McIntyre (Coleman), Elyse Harvey (Scott), and Josh Estridge, and three great grandchildren, Cash and Amos McIntyre, and Graham Konstanski. He was preceded in death by his parents, his brother Donald Biggs, and his wife Jean. A private family service will be held. Allen Funeral Home and Crematory, 4155 S. Old State Road 37, Bloomington have been entrusted with arrangements. Online condolences, photos and memories may be shared with family and friends at www.allencares.com

Maurice Biggs, 98, of Bloomington passed away on August 16 surrounded by his loving family. Born October 27, 1921 in Sebree, Kentucky, Maurice was the eldest of three children born to Dr. Paul and Bessie (Hunt) Biggs. He graduated from Evansville... View Obituary & Service Information

The family of Maurice Biggs created this Life Tributes page to make it easy to share your memories.

Maurice Biggs, 98, of Bloomington passed away on August 16 surrounded...

Send flowers to the Biggs family.