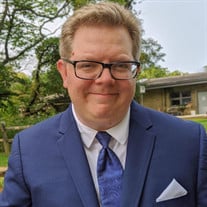 Michael Royal Johnson, 42, of Bloomington, passed away unexpectedly on Friday, April 15, 2022 in Norman, IN. He was born on February 21, 1980 in Evanston, IL, the son of Timothy David and Cynthia Marie (Goss) Johnson. Michael spent his younger years in Northbrook, IL before moving with his family to Bloomington in middle school. He was a 1998 graduate of Bloomington High School North. Michael attended Northwestern University and graduated from Indiana University where he received his bachelor’s degree in Telecommunications in 2013. He worked as a software engineer for IU, most notably at the GlobalNOC and IU Libraries. In 2008, Michael married Sarah Junk at Yellowwood State Forest and Arvo completed their family in 2018. Michael’s greatest joy was being Arvo’s dad. He also loved spending time outdoors hiking and biking in the beauty of Bloomington’s surrounding forests. Michael was passionate about music, both listening and creating. He spent many years studying the violin as a child before evolving into composing his own electronic music, with a special interest in modular synthesizers. He also enjoyed photography and computers. Michael is survived by his wife, Sarah Johnson; his son, Arvo Johnson; his mother, Cynthia Johnson; his sister, Rebecca Johnson; two nephews, Avery (Antonia) Johnson and Ty Johnson, all of Bloomington; a great niece, Jasmine Johnson and great nephew, Elijah Johnson; his mother-in-law, Beverly Fox, of Fort Wayne; and a sister-in-law, Rachel (Andrew) Selle of Madison, WI. He was preceded in death by his father, Timothy Johnson, and his grandparents, Donald and Betty Goss and Royal and Esther Johnson. A celebration of life service will be held at 4:00 p.m. on Saturday, April 23, 2022 at the Allen Funeral Home, 4155 S. Old St Rd 37 in Bloomington, with Rev. John Mangrum officiating. Visitation will be held after the service until 6:00 p.m. at the funeral home. Memorial contributions are directed to a college fund for Arvo, which can be accessed at www.gofundme.com/arvo-college-fund. Allen Funeral Home and Crematory have been entrusted with arrangements. Online condolences, photos, and memories may be shared with family and friends at www.allencares.com

Michael Royal Johnson, 42, of Bloomington, passed away unexpectedly on Friday, April 15, 2022 in Norman, IN. He was born on February 21, 1980 in Evanston, IL, the son of Timothy David and Cynthia Marie (Goss) Johnson. Michael spent his younger... View Obituary & Service Information

The family of Michael Royal Johnson created this Life Tributes page to make it easy to share your memories.