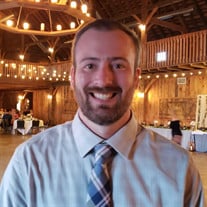 Michael Melwid, 36, Bloomington, passed away on Sunday, May 1, 2022. Michael was born on April 26, 1986 to David and Helen Melwid in Bloomington. After Michael graduated from Bloomington High School North, he went on to complete his degree in marketing from Kelley School of Business at Indiana University. Michael and his wife, Shanel, met in middle school and began dating while juniors at Bloomington High School North, and were married in June of 2012.  Michael was an avid sports fan and especially dedicated to the Chicago Bears and Cubs, win or lose, he was a loyal fan. You could hear him expressing his feelings towards the TV, whether it be positively or negatively. Even when a game wasn’t playing, he would listen to ESPN and, his absolute favorite, The Dan Le Batard Show which always made him laugh. In fact, he considered himself a member of the Stugotz Army.  Michael had a love for sci-fi and like Fox Mulder he wanted to believe in extraterrestrial beings. His interest in sci-fi branched out to his love for movies. He spent many weekends at the theater and would daydream about one day owning a drive-in theater. He would happily share his personal rankings of a movie series and enjoyed a good debate with others about which movies ranked highest.  Above all, he was most dedicated to his family and friends, especially his wife whom he loved dearly. Whether it was going to a family football game, a concert with his siblings, or spending an afternoon playing golf with his brothers, he always made time for family. His siblings and friends often looked to him and knew they could go to him for guidance and sage advice. He was also a devoted uncle to two beautiful nieces whom he adored.  Michael is survived by his wife Shanel (Allen) Melwid; his parents David and Helen (Swarbrick) Melwid; sister Kristen Melwid; brothers Jordan and Daniel Melwid; his grandmother, Mary Lou Melwid. Preceded in death by grandparents Cy Melwid, and Mary and Jack Swarbrick.  A Mass of Christian Burial will be held Friday, May 6th at 10:00am at St. Paul Catholic Center (1413 E. 17th Street Bloomington, IN). A reception to celebrate Michael’s life will be held immediately following the Mass at Michael’s parents residence. To honor Michael’s love for children and animals, please contribute to the Boys and Girls Club at bgcbloomington.org or the Monroe County Humane Association at monroehumane.org in lieu of flowers.  Allen Funeral Home and Crematory 4155 South ld State Road 37 is handling the arrangements and online condolences, photos and memories may be shard with family and friends at www.allencares.com

Michael Melwid, 36, Bloomington, passed away on Sunday, May 1, 2022. Michael was born on April 26, 1986 to David and Helen Melwid in Bloomington. After Michael graduated from Bloomington High School North, he went on to complete his degree... View Obituary & Service Information

The family of Michael J. Melwid created this Life Tributes page to make it easy to share your memories.

Customized sympathy cards. Mailed for you.