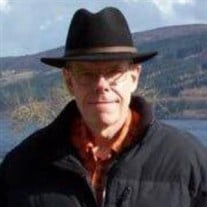 MICHAEL NEWTON passed away peacefully at home on Monday September 6, 2021. Michael was born in Bakersfield, California in 1951. He cultivated dreams of a writing career from age seven, producing small "books" illustrated with photos and original drawings, given or sold for a pittance to classmates. On the practical side, he earned a B.A. in History and Political Science, with a teaching minor in English, pursuing sundry jobs in public education in California (1973-76) and later in Nevada (1979-86). Nearly by accident, Michael advanced his writing dream in 1976, penning a fan letter to the author of his favorite action/adventure novels, the best-selling "Executioner" series. He had forgotten that whimsical letter two months later, when series author Don Pendleton phoned from his home in Indiana, inviting Michael to contribute a substantial chapter to his latest work, The Executioner's War Book. That entry became Michael's first professional publication and earned him an invitation to work with Pendleton in Indiana. By 2020 Michael had written 136 novels under the Pendleton name. But Michael didn’t stop there. As of 2021, his tally of published works was 357, which included 258 novels and 99 nonfiction books. He also published 91 nonfiction articles and 58 shorter pieces, including chapters in several best-selling true-crime anthologies. In 2017 Michael received the Lifetime Achievement Peacemaker Award from Western Fictioneers, honoring his publication of 62 western novels. Michael met his best friend and soul mate, Heather in 2000, and they married at Fort Augustus, Scotland, on the shore of Loch Ness, in 2003. Diagnosed with an untreatable hereditary kidney disease in 1988, Michael lived normally until declining health forced him into home dialysis in 2013. From there, he gained a new appreciation of two favorite singers: Mick Jagger ("What a drag it is getting old") and Jim Morrison ("No one here gets out alive"). They were right all along. If any form of consciousness remains, he'll miss Heather, their cats, writing and reading. In lieu of flowers, Michael would appreciate a donation to his favorite charity, Chachi’s Haven (chachishaven.com), helping 250+ abandoned cats in Israel. Allen Funeral Home and Crematory have been entrusted with arrangements. Online condolences, photos and memories may be shared with family and friends at www.allencares.com

MICHAEL NEWTON passed away peacefully at home on Monday September 6, 2021. Michael was born in Bakersfield, California in 1951. He cultivated dreams of a writing career from age seven, producing small "books" illustrated with photos and original... View Obituary & Service Information

The family of Michael Newton created this Life Tributes page to make it easy to share your memories.

MICHAEL NEWTON passed away peacefully at home on Monday September...

Send flowers to the Newton family.