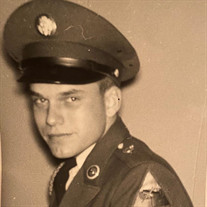 Michael L. “Mike” Sparks, also known by some as” Sparky”, 77, of Bloomington, Indiana went to be with his Lord and Savior on Tuesday, January 18, 2022. He was born on February 15, 1944 in Bloomington, Indiana the son of William Delmar and Anna Laverne (Jones) Sparks. Mike was a 1962 graduate of Bloomington High School. He was a US Army Veteran and served as a supply Sgt. He proudly served in the Army, Army National Guard and Army Reserves for 22 years. Mike married Evelyn June Shields on May 8, 1966 in Bloomington, Indiana they were happily married fifty-five years. He worked for Thompson Consumer Electric/RCA for over 37 years. Mike was a member of Shiloh Pentecostal Temple where he served as an usher and greeter, helped with the funeral dinners and worked around the outside of the church mowing and landscaping, he loved the Lord and loved to work at the church. Mike was an avid outdoorsman, and enjoyed playing in the woods, mushroom hunting, fishing, golfing, playing in the stock market, he was known as a jokester, he loved to mess with and tease his friends. He will be greatly missed by all who loved and knew him. Mike is survived by his wife, Evelyn June Sparks of Bloomington; two daughters, Melissa D. (Keith) Martin of Bedford; Melina D. (Jerry) Myers of Bloomington; seven grandchildren, Cameron (Monica) Ward; Roland Isaac Ward; Ashley Myers; Michael Myers; Kayla Woods; Colton (Jayme) Martin; Carson Cepican; six great grandchildren, Kenny Myers; Haydin McCullough; Ezra Jans; Evelyn Faye Ward; Genevieve Martin and Pippa Martin; three brothers, Pat (Janice) Sparks of Bloomington; Gary Sparks of Indianapolis; Larry (Yvette) Sparks of New Bedford MA; and loved by many nieces; nephews; Aunts; Uncles; cousins and friends. He was preceded in death by his parents, William and Anna Sparks. A funeral service will be held at 7:00pm Monday, January 24, 2022 at the Shiloh Pentecostal Temple. With Rev Russell Elkins and Rev. Fred Stanger Officiating. Visitation will be held from 4:00pm to service time Monday January 24, 2022 at the church. Burial will be held on Tuesday January 25, 2022 at 11:00am at Valhalla Memory Gardens Mausoleum Chapel. Memorial contributions may be made to the Shiloh Temple Missions fund or the Wounded Warrior Project. Allen Funeral Home and Crematory, 4155 S. Old State Rd. 37 in Bloomington have been entrusted with arrangements. Online condolences, photos and memories may be shared with family and friends at www.allencares.com

The family of Michael L. "Mike" Sparks created this Life Tributes page to make it easy to share your memories.

Send flowers to the Sparks family.