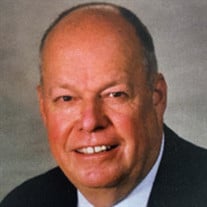 Mike Sutherland 73, of Bloomington, IN passed away on Monday, morning March 1, 2021 at his home with his loving family by his side. Mike was born in Mt. Zion, IL on March 3, 1947 to Louis A. and Caroline Martha (Williams) Sutherland. He was a 1965 graduate of Mt. Zion High School. In 1969, he earned his Bachelor’s of Education degree from Southern Illinois University. For 18 years he worked for JCPenney in various leadership roles. In 1986, he moved his family to Bloomington, IN to oversee the JCPenney store at College Mall. In 1988, Mike became a State Farm Agent and earned several prestigious awards including: 22 times Ambassador Club Traveler, 8 times Chairman Circle qualifier, Crystal Excellence Honor Club, and President’s Club for both Mutual Funds and Multi-line. On November 1, 2019 he retired after 31 successful years. Mike married Mary on June 20, 1980 in Schaumburg, IL. He was a loving and supportive husband and father. He enjoyed traveling with his wife and friends, going on adventures with his children and grandchildren, cheering on his favorite sport teams, playing golf, mentoring and caring for others and coaching his children’s sports teams. He believed in giving back to his community and did this by volunteering through his church and at the Community Kitchen. He also was the first basketball coach for the girl’s team at St. Charles Borromeo Catholic School. He was an active member of St. Paul’s Catholic Church. Mike is survived by his wife, Mary of Bloomington, IN; his children: Brian (Sally) Kolb of Rolling Meadows, IL; Jeff Kolb of Des Plaines, IL; Tracey Neumann of Elgin, IL; Renee (Paul) Kiel of St. Charles, IL; Stacey (Matt) Cale of Urbandale, IA and Steve Sutherland of Indianapolis, IN; 12 grandchildren and 5 great-grandchildren; one sister, Diana Kay Wilson of Harristown, IL; one brother, Larry (Kay) Sutherland of Mt. Zion, IL and several nieces and nephews. He was preceded in death by his parents and brothers; Louis Sutherland and Richard Sutherland. On Thursday, March 4th, visitation will be held at 3:00-5:00pm at St. Paul’s Catholic Center in Bloomington, IN. A funeral mass will follow at 5:00pm with Father Patrick Hyde officiating. On Friday, March 5th, the burial will be held at Queen of Heaven Catholic Cemetery in Hillside, IL at 2:00pm. In lieu of flowers, memorial contributions may be made to the Community Kitchen, Boys and Girls Club, or St. Paul’s Catholic Church. Allen Funeral Home and Crematory have been entrusted with arrangements. Online condolences, photos and memories may be shared with family and friends at www.allencares.com

Mike Sutherland 73, of Bloomington, IN passed away on Monday, morning March 1, 2021 at his home with his loving family by his side. Mike was born in Mt. Zion, IL on March 3, 1947 to Louis A. and Caroline Martha (Williams) Sutherland. He was... View Obituary & Service Information

The family of Mike Sutherland created this Life Tributes page to make it easy to share your memories.

Mike Sutherland 73, of Bloomington, IN passed away on Monday,...

Send flowers to the Sutherland family.