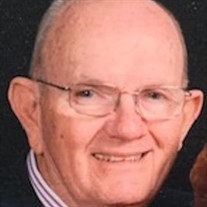 N. Dean Moulden, 92, of Bloomington passed away on Saturday, January 16, 2021 at Bell Trace Health and Living Center. Dean was born on February 18, 1928 to Guy Moulden and Thelma (Godsey) Moulden. He was a 1946 graduate of Bloomington High School where he lettered in football and was a member of the B-mens Club. Dean worked with his father and grandfather in the Godsey Cabinet Shop where he learned to build antique reproductions and restore antiques. He married Sue Wootan in 1950. He enlisted in the US Air Force during the Korean War; went to basic training at Lackland AFB in San Antonio, TX; studied radio electronics at Scott AFB in Belleville,IL before being assigned to USAF Hospital, Lockbourne AFB (near Columbus, Ohio) for medical and electrical equipment repair until his honorable discharge in 1955. Dean was employed at RCA in Bloomington, IN when the first production of color sets began and retired after 30 years as a Quality Control Supervisor. He enjoyed golfing with his retiree friends and was proud of his first hole in one. He continued woodworking from his shop at home and his work can be found in many homes of his family, friends and his church. Dean was a member of the American Legion and a lifetime member of Fairview United Methodist Church where he served as Trustee, usher and choir member. He is survived by his wife of 70 years, Sue Moulden; daughter, Lou Ann Hanson (Steve Waldrip); son, Jeff Moulden (Julie Brown); grandson, Kyle Moulden and step-grandson, David Brown. He was preceded in death by his parents and brothers, Mac and Don. The family would like to thank the staff of Bell Trace Health and Living Center for their kind and compassionate care. A memorial service will be held at a later date when we can gather together safely.Cremation rites have been accorded. Allen Funeral Home and Crematory has been entrusted with arrangements. Online condolences, photos and memories may be shared with family and friends at www.allencares.com. Memoral donations may be made to Fairview United Methodist Church, 600 W. 6 th Street, Bloomingon.

N. Dean Moulden, 92, of Bloomington passed away on Saturday, January 16, 2021 at Bell Trace Health and Living Center. Dean was born on February 18, 1928 to Guy Moulden and Thelma (Godsey) Moulden. He was a 1946 graduate of Bloomington High School... View Obituary & Service Information

The family of N. Dean Moulden created this Life Tributes page to make it easy to share your memories.

N. Dean Moulden, 92, of Bloomington passed away on Saturday,...

Send flowers to the Moulden family.