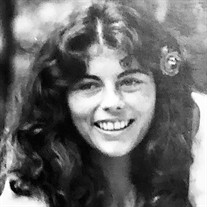 While remembering Niki Gerschoffer–Stratigos, she was always the person that her family and friends would go to with questions about gardening and cooking- (Afterall, she was a master gardener!) and she always knew exactly what advice to give. She was resourceful, could always see the potential of people and circumstance, was the consummate caretaker, and nurtured her intentions with all of her heart. In her immediate family, we have a motto that will carry into the future, WWND? What would Niki do) She was our peaceful warrior. This was Niki’s way! Our beloved Niki who entered eternal life on Monday, February, 28th whose universal spirit is carried on by her devoted husband Spyridon, her mother Diane Goss, 2 sons, Nicolas, George, (Erin), 1 stepson, Vajra, (Stacey), 5 grandchildren, Olivia, Cannon, Sayre, Spyridon, Theodore, and an extended family of relations and friends from every walk of life. We were blessed to learn many valuable lessons from Niki during her 70 years, and among the long list, she would be thrilled to know that the things that hosted her curiosity, the efforts she made and the love she shared truly made a difference to both those that knew her well and even those that shared just a passing interaction. Niki Gerschoffer was born in Elkhart, IN on October 30th in 1951. She pursued her undergraduate and graduate academic interests at Indiana University in Bloomington IN where she serendipitously met Spyridon “Strats” Stratigos and fell in love. A certified master botanist, Niki and Strats built their home by hand in the rolling hills of Owen County with plenty of room to grow! A joint dream that she nurtured and brought to fruition as she expressed her joy of life through sowing, growing, and harvesting from meticulously maintained gardens and fields surrounding the home. A true trailblazer of the farm to table movement, Niki had a purpose and a plan for the gardens she tended. This concentric vision made its way into the kitchen where, yet another facet of genius emerged. Known for her brilliant and seemingly effortless ability to coax the essence of flavor from the ingredients she used; if you ever were so lucky to have had even a cookie from Niki’s kitchen you know of this magic. Transforming a house to a home, Niki was the embodiment of the mother figure. Putting others ahead of herself with a smile on her face and a twinkle in her eye. Her joy was found in providing joy to others. From a young age, Niki was enthralled with Mexican and central American culture. After she graduated with a degree in Anthropology from IU, she worked as the registrar at the Mathers Museum and later served as an assistant curator at the Wylie House in Bloomington. After marrying Strats, she became his partner at the Uptown Café for fifteen years until they sold their interest in the business in 2001. She traveled to Mexico several times to explore the Mayan culture. While visiting the Yucatan and Chiapas she collected many textiles and artifacts that adorned the walls of her home. Her trip with Strats to Scotland and particularly a visit to the spiritual island of Iona was a special memory. There will be a private family service for Niki at the Allen Funeral Home on Thursday the 3rd of March and a celebration of her life sometime this summer. The family would like to thank the Hospice community and friends for their support in the last months of her life. Allen Funeral Home and Crematory have been entrusted with arrangements. Online condolences, photos and memories may be shared with family and friends at www.allencares.com

While remembering Niki Gerschoffer&#8211;Stratigos, she was always the person that her family and friends would go to with questions about gardening and cooking- (Afterall, she was a master gardener!) and she always knew exactly what advice... View Obituary & Service Information

The family of Niki Diane Gerschoffer-Stratigos created this Life Tributes page to make it easy to share your memories.

While remembering Niki Gerschoffer–Stratigos, she was always...

Send flowers to the Gerschoffer-Stratigos family.