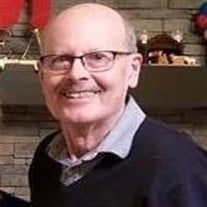 Norm Papke, (79), of Bloomington, passed away on (August 28, 2020) at his home. Born February 28, 1941 in Lincoln, Nebraska, he was the son of Reinhardt and Christina (Mahloch) Papke. Norm was raised on a small farm in Gage County, southeast Nebraska. After graduating from Cortland, NE, High School in 1958, he attended the University of Nebraska in Lincoln. He graduated with a Bachelor's Degree in Mathematics Education and an ROTC reserve Army officer. Norm served two years of active duty (Sep. 1962 - Sep. 1964) with the 5th Infantry Division (Mechanized) at Fort Carson, CO. On March 22, 1963, he married the love of his life, Arllys Hayman, of Holland, NE. After completing active duty, he taught math at Golden, CO, High School from 1964-68. After earning a Master's Degree in Mathematics from the University of Illinois, he was hired by NSWC Crane in August 1969. He held various positions at Crane, including aircraft survivability projects, and retired in 2000 after 31 years. He worked an additional ten years as a civilian contractor for Crane, retiring in May 2010 due to health reasons. Norm had been diagnosed with Multiple Myeloma, a blood cancer, which he battled for ten years. Norm was an active member of Faith Lutheran Church in Bloomington since coming to Bloomington in 1969. Norm was an avid sports enthusiast. He especially loved his Nebraska Huskers football, Indiana University basketball, and the Faith Lutheran softball team. Norm greatly treasured time with his family. He and Arllys had three daughters, Suzy (Tracy) Houpt of Fort Worth, TX, Heather (Phil) Ross of Orleans, IN, and Emily (Brad) Schweitzer of Brownsburg, IN. They had nine grandchildren and one great-grandchild. Surviving relatives include Arllys of Bloomington; Norm and Arllys's children and their spouses; the Houpt children, Jackie (Ryan) Hatcher, Sarah Houpt, Bonnie (Josh) Siniard, and Emma Houpt; the Ross children, David, Andrew, and Matthew; the Schweitzer children, Christian and Jocelyn; and great-grandson Sullivan Hatcher. Also, his two older sisters, Verona Burke of Bethany, OK, and Valerie Kerns Marhenke of Lincoln, NE and their descendants, as well as Arllys's two brothers and their families. Norm was preceded in death by his parents and one nephew. A private funeral service will be held at Faith Lutheran Church. The family asks that memorial contributions be made to the Faith Lutheran Endowment Fund or the Leukemia and Lymphoma Society. Online condolences to the family can be made to www.allencares.com

Norm Papke, (79), of Bloomington, passed away on (August 28, 2020) at his home. Born February 28, 1941 in Lincoln, Nebraska, he was the son of Reinhardt and Christina (Mahloch) Papke. Norm was raised on a small farm in Gage County, southeast... View Obituary & Service Information

The family of Norman Lee Papke created this Life Tributes page to make it easy to share your memories.

Send flowers to the Papke family.