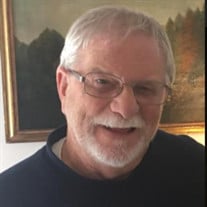 Norman L. Swick, 78 of Newnan, GA, formally of Alton, passed away at his home on Tuesday, April 27, 2021 surrounded by his wife and children following a two-year battle with lung cancer. Norman was born in Bloomington, IN to Dr. Ralph and Dorothy (Morrison) Swick on June 13, 1942. On June 2, 1965, he married Judy (Winkleman) Swick of Harrisburg, IL, who shared 55 years together and stayed by his side during his illness. Norman graduated with a Bachelor’s degree in Art Education and a Master’s degree in Art History from Southern Illinois University. He was a beloved Art teacher for 38 years in the Alton School System, teaching at Central and East Junior High School, North Middle School and Alton High School, retiring in 2002. He and wife Judy, and later with son Nathan, shared a life time passion for art, antiques and home renovation projects. In addition to his wife Judy, and son, Nathan, of Newnan, GA, he is survived by three daughters; Brooke (Jon) Davison of Peachtree City, GA; Tyra Tuetken of Bethalto, IL; Kara Edwards of Alton, IL; nine grandchildren, Lauren Linenfelser, Rachel and Olivia Davison all of Peachtree City, GA; Dillon (Blake) Santoni of Springfield, IL; Paige Cooper, Raigen Swick, Aden Edwards all of Alton, IL; Addie Tuetken of Godfrey, IL and Jarrid (Kedra) Franke of East Alton, IL; one great-granddaughter, Maddie Franke. He is preceded in death by his parents and his brother, Mike Swick all of Bloomington, IN. Per his wishes, a private memorial and graveside burial will be held in Bloomington, IN on May 10, 2021. Donations in his memory can be made to the American Lung Association or the American Cancer Society. Allen Funeral Home and Crematory have been entrusted with arrangements. Online condolences, photos and memories may be shared with family and friends at www.allencares.com

Norman L. Swick, 78 of Newnan, GA, formally of Alton, passed away at his home on Tuesday, April 27, 2021 surrounded by his wife and children following a two-year battle with lung cancer. Norman was born in Bloomington, IN to Dr. Ralph and Dorothy... View Obituary & Service Information

The family of Norman L. Swick created this Life Tributes page to make it easy to share your memories.

Send flowers to the Swick family.