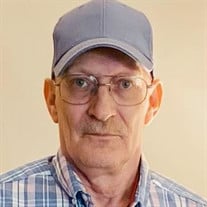 Oscar “Leo” Hash, 65, of Bloomington, passed away on Sunday morning March 7, 2021 at his home with his loving wife by his side. Leo was born in Bloomington, Indiana on February 16, 1956 to Oscar Y. and Agnes L. (Bohall) Hash. He was a graduate of the Bloomington North High School. Throughout his life, Leo worked as a security guard, bodyguard, maintenance-man, and a poisonous gas tester among various other jobs. Leo married Phyllis June Baugh on December 25, 1974 in Whitehall, Indiana. He loved his wife, family, and friends. Leo was a gun enthusiast, an avid outdoorsman, and loved feeding the many neighborhood animals. His most favored pastime was telling his many stories. Leo will be greatly missed by all who loved and knew him. Leo is survived by his wife, Phyllis, of Bloomington; his children, Joseph (Kristin) Hash of Stafford, VA; Aisha (Josh) Schmackers of Indianapolis; seven grandchildren, Brooks, Banks, Henry, Peyton, Alexandria, Huntington, and Holiday; one brother, Sam Hash of California; his nephew (who was like a brother), Charles Hash of Greene County, IN; his best friend Ed Grogan of Bloomington, IN; and several other nieces and nephews. He was preceded in death by his parents, one sister, Janice Pedro: one brother, Donald Hash. Visitation will be held from 11:00am to 1:00pm Saturday, March 13, 2021 at the Allen Funeral Home 4155 S. Old St Rd 37 Bloomington. Burial will be at the Duncan Cemetery in Nashville, Indiana. Allen Funeral Home and Crematory have been entrusted with arrangements. Online condolences, photos and memories may be shared with family and friends at www.allencares.com

The family of Oscar "Leo" Hash created this Life Tributes page to make it easy to share your memories.

Oscar “Leo” Hash, 65, of Bloomington, passed away on Sunday morning...

Send flowers to the Hash family.