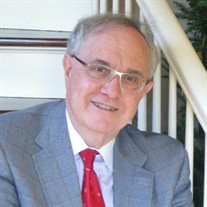 Patrick O’Meara, professor and vice president emeritus of Indiana University, scholar, administrator, mentor, beloved uncle, and dear friend, born January 7, 1938, Cape Town, South Africa, died peacefully in his home on March 30 after a brief illness. On his last day, his family remained by his side so he would not be alone as his spirit left this world. Patrick is survived by his nephew Tim O’Meara and his wife Bridget (Hoban) who were ever-present throughout his final days, nieces Maria, Jeannie, Katie, Eileen, and Suzanne O’Meara, sister-law Lorraine (Rademeyer), and 8 great-nephews and nieces and their children. Patrick was pre-deceased by his brothers Timothy and Daniel, sister-in-law Jean (Fadden) and parents Fiorina (Allorto) and Daniel. Patrick is also survived by many dear and well-loved friends whose lives he touched with his kindness, generosity, and playful spirit. Leaving a Bloomington restaurant or IU musical performance with Patrick was a lengthy affair, as he seemed to know everyone and always stopped to catch up on their lives and make the proper introductions. Born in Cape Town, South Africa to an Irish father and Italian mother who ran a bakery, Patrick came to IU in the 1960s and earned his master's and doctoral degrees in political science. In 1972, he became director of the African Studies Program, a role he served for more than two decades. Today, the center is part of the School of Global and International Studies. Patrick later became IU's first vice president for international affairs. Over five decades, Patrick played an instrumental role in IU’s international expansion. Recognizing the critical importance of global relationships, Patrick traveled the world forming connections with governments and academic institutions, and meeting with heads of state and dignitaries, including Nelson Mandela, Desmond Tutu and the Dalai Lama. He also led the university’s involvement in the establishment of South Africa’s Khanya College, and other initiatives addressing the educational and economic challenges the country faced after apartheid. Patrick made a lasting impact as a world scholar. In 1977, he published the textbook Africa, which became one of the most popular introductory texts for African studies. Now in its fourth edition, Africa is still widely used. He authored numerous books and articles throughout his career. In a 1987 essay about the collapse of South Africa’s National Party, Patrick wrote that there was “no longer a pretense of an underlying rationale for its actions other than the maintenance of white power.” With his quick wit and astute observations, Patrick was a delight to be around. He once observed that the hotel carpeting was “too ugly to ignore” or, when asked if his Easter necktie was new, replied “no, I’ve just resurrected it for the occasion.” Patrick was incredibly close to his family, spending holidays and vacations with his nieces and nephews in South Bend and Cape Town. Unc would drive up to South Bend a few days before Christmas and take us zipping around town, picking up Polish pastries from the Farmer’s Market, Italian cookies from Macri’s, lasagne from Bamber’s, and necessary odds and ends to decorate the house. He played carols on the piano, set out little bowls of nuts and cheese plates and—wearing a bright red vest and Christmas tie—was always the first ready for Mass. He also remained close to his family in Cape Town, visiting them throughout the years and conversing with his niece Suzanne regularly over the past year. Unc loved games, puzzles, and little surprises. A July 4th photo captures him buying a jumbo pack of fireworks at Crazy Steve’s, a twinkle in his eye. He knew every piece of the puzzle collection in the Lilly library and most of the people who worked there. In his airy home in the woods, he displayed his own wonderful collection of pop-up books, puzzles, and toys—not to mention the coffee table painted with trompe l’oeil teacups and a checkered cloth. Even his silk ties, upon close examination, revealed charming patterns of honeybees and flowers, camels and polar bears, dolphins, owls, flamingoes, and swirling intricate paisleys. Above all, we remember Patrick for his kindness. He was attuned to others’ pain and sadness, and quick to offer comfort, understanding, and to advocate on their behalf. Throughout his life, Patrick shared his curiosity and abundant joy in all he found in the world, most recently through a virtual launch of Windows on Worlds, a book he coauthored with Leah Peck, that celebrates signature pieces from the university’s international collections. Up until two weeks before his death, Patrick was busy chatting with his friends and family and writing another book about the history of the university he loved. Family and friends are deeply blessed to have had Patrick in our lives for as long as we did. He will be deeply missed, and fondly remembered. Patrick will be laid to rest near his brother and sister-in-law at Cedar Grove Cemetery at the University of Notre Dame. Services will be private. Allen Funeral Home and Crematory, 4155 S. Old State Road 37, Bloomington have been entrusted with arrangements. Online condolences, photos and memories may be shared with family and friends at www.allencares.com If you wish to make a gift in Patrick’s memory, you may donate to the Patrick O’Meara Scholarship through the IU Foundation. Select IU Foundation from the dropdown menu. Type Patrick O’Meara Scholarship in the field below. Patrick’s career is covered in this tribute by Indiana University.

The family of Patrick O'Meara created this Life Tributes page to make it easy to share your memories.

Send flowers to the O'Meara family.