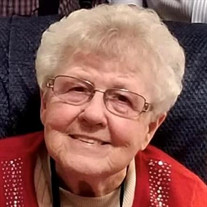 Rose Evelyn McGuire, 93, of Bloomington passed away Friday, December 25, 2020 with her husband by her side. She was born on March 31, 1927 in Stearns, Kentucky the daughter of Willie E. and Sarah Jane (Neely) Jones. Evelyn was a 1945 graduate of Solsberry High School. She married Warren E. McGuire on June 19, 1948 in Bloomington, Indiana. She worked at RCA during WWII as a repair inspector. She retired from Indiana University after 33 years in the accounting department. She was a member of the Fairview United Methodist Church, Social Order of Beauceant, and the Order of Eastern Star in Bloomington, Indiana. Her favorite pastimes were reading, crocheting and trying out new recipes. She enjoyed her grandchildren and loved watching them play football, baseball, cheerleading, singing, dancing, and their plays in Sounds of South. Evelyn is survived by her husband, Warren E. McGuire of Bloomington; her sons, Terry L. (Dee Dee) McGuire of Bloomington; Dennis K (Beverly) McGuire of Bloomington; five grandchildren, Sarah (Kevin) Hutchins; Michael (Megan) McGuire; Patrick (Kaity) McGuire; Christopher McGuire and Megan McGuire; two great grandsons, Payton and Parker Hutchins; two sisters, Myrtle Byrer of Washington; and Imogene (Joe) Burcham of Bloomfield; and several nieces and nephews. She was preceded in death by her parents; four sisters, Alta Strunk; Mabel Hobson; Elsia Miller and Betty Lou Jones; three brothers, Elbern Jones; Raymond Jones and Hoover Jones. A private visitation and funeral service will be held for the family at the Allen Funeral Home 4155 S. Old St Rd 37 Bloomington. Burial will follow at the Valhalla Memory Gardens. Allen Funeral Home and Crematory have been entrusted with arrangements. Online condolences, photos and memories may be shared with family and friends at www.allencares.com

Rose Evelyn McGuire, 93, of Bloomington passed away Friday, December 25, 2020 with her husband by her side. She was born on March 31, 1927 in Stearns, Kentucky the daughter of Willie E. and Sarah Jane (Neely) Jones. Evelyn was a 1945 graduate... View Obituary & Service Information

The family of R. Evelyn McGuire created this Life Tributes page to make it easy to share your memories.

Send flowers to the McGuire family.