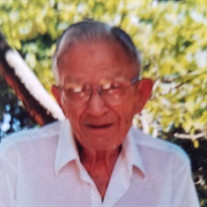 Richard Donald Stuart, 95, of Bloomington passed away on Thursday, December 4, 2020 at Stonecroft Health Campus. He was born on April 17, 1925 in Monroe County, the son of Ollie and Bertha (Johnson) Stuart. He graduated from Bloomington High School. He was a World War II veteran and was discharged from the 506th Military Police Battalion in 1946. Upon returning from Europe, he enrolled at Purdue University graduating in 1950 with a Bachelor of Science in Agriculture and a Master of Science degree in 1952. He and Rebecca (Winslow) were married February 4, 1950. Richard began his teaching career in Merrillville, IN moving on to Boonville, IN then to Elnora, IN. They then moved back to Bloomington where he taught at Bloomington High School, then Binford Junior High School, retiring from Batchelor Middle School. Richard was secretary for the Monroe County Fair board for 50 years. Every summer he could be found at the county fair. He was a 4-H leader for the Thrifty Toilers 4-H Club. He was a volunteer for the Monroe County Historical Society for several years. Among other things, he enjoyed reading, the outdoors, going to auctions and for drives. Traveling in the US and overseas with the Fields Afar Purdue Agriculture Alumni Club were very special times for he and Rebecca. Richard is survived by his daughter and son-in-law, Sarah L. and Mike Nelson; his son, Roger A Stuart, all of Bloomington; one granddaughter, Kristin L. Nelson of Indianapolis, IN. He is also survived by sister, Nancy Wood of Shawnee, KS; brother and sister-in-law Tom and Chris Stuart, Toledo Ohio, and several nieces and nephews. He was preceded in death by his wife of 69 years Rebecca (Winslow) Stuart, and his parents, Ollie and Bertha (Johnson) Stuart, and brother-in-law Robert Wood of Shawnee, KS. Visitation will be held from 11:30am until 1:30pm Wednesday, December 9,2020 at the Allen Funeral Home and Crematory, 4155 S. Old St. Rd. 37, Bloomington, with Reverend Ray New officiating. A private service will follow with burial at Clear Creek Cemetery. Memorial contributions may be made in Richard's memory to the Monroe County Historical Society. Online condolences, photos and memories may be shared with family and friends at www.allencares.com

Richard Donald Stuart, 95, of Bloomington passed away on Thursday, December 4, 2020 at Stonecroft Health Campus. He was born on April 17, 1925 in Monroe County, the son of Ollie and Bertha (Johnson) Stuart. He graduated from Bloomington High... View Obituary & Service Information

The family of Richard Donald Stuart created this Life Tributes page to make it easy to share your memories.

Richard Donald Stuart, 95, of Bloomington passed away on Thursday,...

Send flowers to the Stuart family.