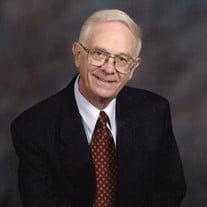 Robert John Vajko, 84, passed away peacefully on December 20, 2020 in Bloomington, IN. Robert (Bob) was born April 27, 1936 in Chicago, IL, the son of John Robert Vajko and Ethel Sweeney. As a young man, Bob worked semi-professionally as an illusionist, adept at sleight-of-hand and escape tricks. He joined the U.S. Air Force in 1953, serving in intelligence at a base in Ruislip, England. He met his wife Noreen there in 1955, and they married two years later. College and four children later, Bob and Noreen began pastoral ministry in France in 1965. In 29 years, they established several churches in the suburbs of Paris. In 1995, they moved to Australia, where Bob lectured and directed a program at the Adelaide College of Ministries while also pastoring a local church. Despite his many ministry 'hats', Bob always set aside time for scholarly study (his personal library ran to 6,000 volumes), and he eventually completed a doctoral degree in missiology at Trinity Evangelical Divinity School. Bob and Noreen moved in 2003 to Bloomington, IN, where they served in area churches. Bob also counseled Christian pastors, teaching seminars to church leaders in Eastern Europe, Africa, and Southeast Asia. After Noreen passed in 2019, Bob continued to mentor young leaders in the Bloomington Bible Church. He met Barbara Maxwell, also a widowed Christian ministry leader. They were married October 27, 2019 in Bemidji, Minnesota. Bob was dearly loved by his children, grandchildren, and great-grandchildren. He also touched many lives throughout the world. Bob was preceded in death by his parents and his wife, Noreen. He is survived by his wife Barbara Vajko; his brother Richard Sweeney, his sister Donna Vajko-Schnayer; his four children Dale (& Emily) Vajko, Robert (& Jody) Vajko Jr., Gail (& Tim) O’Connor, and Renée (& Len) Srch, along with 14 grandchildren and 12 great grandchildren. A funeral will be held on Monday, December 28, 2020 at 1:00pm, at Allen Funeral Home and Crematory 4155 South Old State Road 37, restricted to immediate family only. A public memorial service will be held at a later date, post-pandemic. Online condolences, phots and memories may be shared with family and friends at www.allencares.com. In lieu of flowers, donations may be made to Bloomington Bible Church (where Bob was a member): www.bloomingtonbible.org/give

Robert John Vajko, 84, passed away peacefully on December 20, 2020 in Bloomington, IN. Robert (Bob) was born April 27, 1936 in Chicago, IL, the son of John Robert Vajko and Ethel Sweeney. As a young man, Bob worked semi-professionally as an... View Obituary & Service Information

The family of Robert John Vajko created this Life Tributes page to make it easy to share your memories.

Send flowers to the Vajko family.