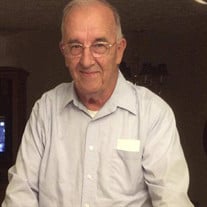 Roger W. Vaught, 80, of Bloomington went home to be with the Lord on Friday, February 12, 2021 at the IU Health Hospice House surrounded by his family. He was born on August 13, 1940 in Bloomington, Indiana the son of Thomas Edward and Rosie Charlotte (Clark) Vaught. He attended Bloomington High School, and then finished his education in the U.S. Army. Roger was so proud to be a U.S. Army Veteran serving during the Vietnam War era. He worked for Indiana University for over 37 years as the ROTC Supply MPC Assistant retiring in 2000. He also worked when he was younger for the Bloomington Parks and Rec department for several years. He married Linda C. Prince on July 25, 1997 in Bloomington, Indiana. Together they were happily married for over 23 years. Roger was a lifetime member of the Sanders Pentecostal Church, where he served as Usher for 42 years. He loved the Lord and all of his church and family members. He enjoyed taking pictures and also enjoyed recording and making gospel music. He spent many hours creating reel to reel movies of his family and also church services. He loved his family dearly and also enjoyed spending time with all of his friends. Roger was such a funny human being with a superb sense of humor and could make anyone laugh. All the neighborhood kids would collect at Roger's house where he and Tommy, his son, would entertain them with games and Bible stories. He will be greatly missed by all who knew and loved him. Roger is survived by his wife, Linda Vaught of Bloomington; his children, Tommy (Minnie) Vaught of Bloomington; Greg Prince and Melissa (Adam) Shields both of Bedford; three grandchildren, Brandon Vaught; Colton Prince; Braydon Shields; one great granddaughter, Addilyn Prince; two sisters, Imogene Robertson of Solsberry; and Glenda Dunlap of Smithville; and several nieces and nephews. He was preceded in death by his parents; an infant daughter, Michelle Vaught; one brother, Duane Vaught; three sisters, Marcene McNew; Geraldine Bouher and Avaline Walker. A funeral service will be held at 2:00pm on Saturday, February 20, 2021 at the Sanders Pentecostal Church with Rev. Joe Nelson officiating. Visitation will be held Saturday, February 20, 2021 from 10:00am to time of funeral service at the church. Burial will be at Smithville Cemetery. Military honor services will also be performed following the visitation. Memorial contributions may be made in Roger's name to the Sanders Pentecostal Church. Allen Funeral Home and Crematory have been entrusted with arrangements. Online condolences, photos and memories may be shared with family and friends at www.allencares.com

Roger W. Vaught, 80, of Bloomington went home to be with the Lord on Friday, February 12, 2021 at the IU Health Hospice House surrounded by his family. He was born on August 13, 1940 in Bloomington, Indiana the son of Thomas Edward and Rosie... View Obituary & Service Information

The family of Roger W. Vaught created this Life Tributes page to make it easy to share your memories.

Send flowers to the Vaught family.