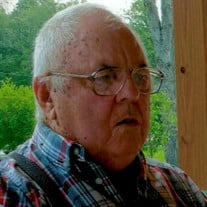 Ronald Edward Cooper, 79, of Bloomington passed away on Wednesday, August 25, 2021 at the Brown County Health and Living in Nashville, Indiana. He was born on October 26, 1941, in Bedford, Indiana the son of Harold Edward and Gretchen Naomi (Moore) Cooper. Ronald was a 1959 graduate of Bloomington High School. He was married to Sandra Lynn Jesch on August 18, 1979, in Clear Creek, Indiana. He was a member of the Clear Creek Christian Church, a fifteen-year member of the Indian Creek Lions Club and a forty-five-year member of the Loyal order of the Moose Lodge in Bloomington. Ronald retired from the CSX Railroad. He was a member of the Mid-States Mule and Donkey Association. He enjoyed raising donkeys on his farm. He liked going to the County and State Fairs to see draft, mule, and donkey hitch competitions. He loved his family and enjoyed spending time with family and friends. He will be greatly missed. Ronald is survived by his daughter, Carri (Toby) Liff and her mother Donetta of Bloomington; three grandchildren, Kava Rose (Sam) Seek of Bloomington; J. Walker Edward Crane (Haven) of Bloomington and Garrett Liff Weiss of Ohio; three great grandchildren, Anthony D. Cooper Staggs; Caden D. Seek and Brayleigh R. Seek and his best friend, Shirley Reed of Bloomington as well as many nieces, nephews, and cousins. He was preceded in death by his parents, wife Sandi Cooper, and brother Jim Cooper. A memorial service will be held at 7:00pm Tuesday August 31, 2021, at the Allen Funeral Home 4155 S. Old St Rd 37 Bloomington, with his cousin Ret. Col Steve Clouse officiating. Visitation will be held from 5:00pm to 7:00pm Tuesday at the funeral home. A private burial will be held for the family at Valhalla Memory Gardens. Cremation Rites have been accorded. No flowers please. Instead, the family asks that memorial contributions be made to the Indian Creek Lions Club, 8360 W Rock East Rd Bloomington 47403. Allen Funeral Home and Crematory have been entrusted with arrangements. Online condolences, photos and memories may be shared with family and friends at www.allencares.com

Ronald Edward Cooper, 79, of Bloomington passed away on Wednesday, August 25, 2021 at the Brown County Health and Living in Nashville, Indiana. He was born on October 26, 1941, in Bedford, Indiana the son of Harold Edward and Gretchen Naomi... View Obituary & Service Information

The family of Ronald Edward Cooper created this Life Tributes page to make it easy to share your memories.

Ronald Edward Cooper, 79, of Bloomington passed away on Wednesday,...

Send flowers to the Cooper family.