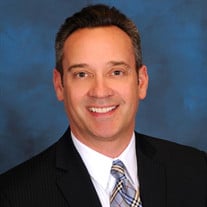 Russell Percifield, 58, of Bloomington, Indiana, was released from his long battle with glioblastoma on May 2, 2022. He will be remembered for his strength and positive attitude in the face of a terminal diagnosis over four years ago. Russell moved to Bloomington from Columbus, Indiana to attend Indiana University and made it his permanent home. After college, Russell spent his professional career in banking. He retired from Peoples State Bank as Assistant Vice President and Branch Manager in 2018. Russell’s love language was acts of service. He put the needs of those around him above his own and downplayed his illness so as not to make others uncomfortable. He will be remembered as a gentleman. He should also be remembered for his intelligence, quick wit, generosity, kindness, love of fast cars, dry martinis, and dad jokes. Russell and Jill shared nearly 40 years together with their cats, enjoying travel, work, quiet times, ups, downs, and all that goes with a life well-lived. He was lovingly supported by his friends and family, his Monday night crew, his cancer club support group, his former colleagues and employees, his doctors, and finally, the staff at Hospice House. He is irreplaceable to his partner Jill Robinson and their cat Cupcake. He is survived by his family including his parents, Lewis and Jean Percifield, sister Karen Busch, sister Luann Welmer (David), and brother Steve (Glynis), all of Columbus; and by his Robinson family of mother Margaret Robinson and sister Julie Robinson of Richmond, Indiana, sister Marlene Fulcher (Robert) of Bloomington, and brother Scott Robinson (Courtney) of Cincinnati, Ohio. In addition, he is survived and treasured by nieces, nephews, aunts, uncles, and cousins who played an important part in his life. A Celebration of Life will be held later this year in Bloomington. Memorial donations may be made to Pets Alive at www.petsaliveindiana.org or mailed to: 2444 South Walnut Street, Bloomington, IN 47401. Cremation Rites have been accorded. Allen Funeral Home and Crematory have been entrusted with arrangements. Online condolences, photos, and memories can be shared with Jill and both families at www.allencares.com.

Russell Percifield, 58, of Bloomington, Indiana, was released from his long battle with glioblastoma on May 2, 2022. He will be remembered for his strength and positive attitude in the face of a terminal diagnosis over four years ago. Russell... View Obituary & Service Information

The family of Russell Percifield created this Life Tributes page to make it easy to share your memories.

Send flowers to the Percifield family.