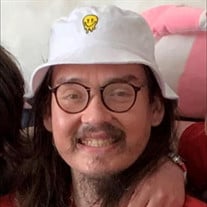 Skyler Lee Smith slipped peacefully into eternal rest on Thursday, April 28, 2022, surrounded by family and friends. Skyler was born February 17, 1993, in Bellingham, Washington, and was raised by his loving parents: Marci and Jay Smith. Skyler enjoyed baseball, football, and Boy Scouts, having earned his Eagle Scout award in 2011. He graduated from Bloomington High School North in 2011 and attended Florida Institute of Technology for several years. He was employed by Cook Pharmaceutical in Bloomington. A man of many hobbies and interests, which included music creation, enjoying video games, and audio equipment. Taking a particular interest in a wide array of movies and shows. Skyler is survived by his parents, Jay and Marci Smith, his brother, Chase Smith, his fiancé, Jacquelyne Zahner, and his daughter, Calliope Sky Smith. He is also survived by his grandmothers, Marcia DeLorme, of Bellingham, Washington, and Judith Smith, of Floresville, Texas. He is also survived by numerous aunts, uncles, and cousins, and many dear friends and extended family members across the United States. Funeral services will be handled by Allen Funeral Home and Crematory, 4155 South Old State Road 37, Bloomington, Indiana 47401. There will be a visitation on Friday, May 6, from 4 – 8 pm, and visitation at Noon on May 7, followed by a funeral service at 1 p.m. A private internment will take place at a later date. Memorial donations may be made to the gofundme pages already established. https://gofund.me/558b6273 https://gofund.me/32f035a3 Online condolences, photos and memories may be shared with family and friends at www.allencares.com

The family of Skyler Lee Smith created this Life Tributes page to make it easy to share your memories.