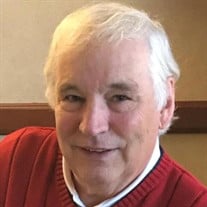 Terry Allen Carmichael, 73, passed away June 29, 2021 in his beloved city of Bloomington, IN. He was born February 8,1948 in Shelbyville, IN to the late Max Carmichael and Margaret Conklin. Terry was a veteran of the United States Army, Army National Guard and Reserve of the Army. He served in the Intelligence Division in the Vietnam War. He retired from Verizon as a Software Engineer.  Terry served as a trustee and member of the American Legion Post 18 and the VFW 604 in Bloomington, IN. He was a member of the Monroe County Veterans Honor Guard. Terry enjoyed having family game nights, boating, fishing, golfing, and taking his corvette out for a ride on a beautiful day. He was a devoted Dad and Poppy and loved his family more than anything in this world. Terry enjoyed every moment spent with his family and friends.  Terry is survived by his six daughters, Kim Smith (Jack), Theresa Carmichael, Melinda Stinnett (C.W.), Tiffany Studer (James), Brittany Carmichael (Alexi), and Jennifer Carmichael; siblings Vicki Belser (Fred) and William Carmichael; eleven grandchildren, Rhianna Mast, Jacob Smith, Trey Stinnett, Jase Langley, Serenity Duncan, Zane Studer, Javian Jones, Aryianna Jones, Quincey Carmichael, Dominic Carmichael, and Ella Birdsell; and  partner, Gretchen Johnson. Terry is preceded in death by his parents, Robert and Margaret Conklin. Family and friends may gather for visitation from 4:00 p.m. to 8:00 p.m. on July 6, 2021 at Allen Funeral Home and Crematory, 4155 South Old State Road 37, Bloomington, IN, 47401. The funeral service will begin at Allen Funeral Home at 1:00 p.m. on July 7, 2021. Terry will be laid to rest in the Valhalla Memory Gardens. In lieu of flowers, the family would like to request that memorial contributions be made to the Monroe County Veterans Honor Guard, P.O. Box 2713, Bloomington, IN, 47402.  Online condolences, photos and memories may be shared with family and friends at www.allencares.com

Terry Allen Carmichael, 73, passed away June 29, 2021 in his beloved city of Bloomington, IN. He was born February 8,1948 in Shelbyville, IN to the late Max Carmichael and Margaret Conklin. Terry was a veteran of the United States Army, Army... View Obituary & Service Information

The family of Terry Allen Carmichael created this Life Tributes page to make it easy to share your memories.

Send flowers to the Carmichael family.