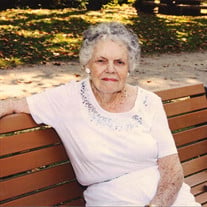 Thelma I. Richardson, age 98 went home to be with the Lord on Wednesday January 6, 2021 at her residence. She was born in Bloomington, Monroe County, Indiana to Mattie and Fowler Neal on June 22, 1922. She lived her entire life in the surrounding area and attended Dolan Elementary School and Bloomington High School. Thelma was the longest living member for 82 years of the New Prospect Baptist Church and served in many capacities such as choir, missionary, Superintendent of Bible School, and of Sunday school as well as teaching Primary Class and Junior Class. Thelma also assisted in publishing the book Our Little Village. She was a member of the Flyings Hoosiers Motorcycle Club, Busy Martha’s Home Ec Club and of the Dolan Doers Social Club. As an active motorcyclist, she took a single trip of over 6,000 miles. She loved singing at nursing homes and other community functions with the Nightingales singing group. Thelma was a long time member of the Bloomington Chapter of the Eastern Star #223 and served as Worthy Matron and was appointed Grand Representative for the State of Colorado. The Bloomington chapter closed but Thelma had duel membership in the Solsbury Chapter #547 where she is now serving as Esther. She retired from RCA after 33 years of service. Thelma married Hershel (Tom) Hensley in 1940 but was separated by death in a motorcycle accident. Later she married Charles (C.E.) Richardson, a local contractor who passed away in 2014. Others who preceded her in death were her parents, Mattie and Fowler Neal, siblings Obert Neal, Hazel Day, Mary Wallace, Louise Wilbur, Viola Stancomb, James Neal and a twin sister, Elma Neal. Surviving are 2 sister-in- laws, Peggy Krebbs and Wilma Fiscus as well as several nieces and nephews. Thelma will be remembered by many friends and relatives for her great spirit and generosity and devotion to her church. Growing old never slowed her down. She still drove a car, enjoyed gatherings and did programs for groups performing her “clown acts”. She had a sharp memory and could recite long monologues. Her favorite pastimes were garage sales and playing cards. Thelma also enjoyed the times spent motorcycle traveling and seeing the United States and was content with her life. Her nieces Bonnie Guthrie, Verna Sibbrell and Marcheta Owen and her sister-in-laws and nephews and nieces were loved dearly by her. Aunt Thelma loved having garage sales and had many in her lifetime. She enjoyed antiques and collectibles and the people who came to her sales. All will miss Aunt Thelma greatly for we loved her with all our hearts. Public visitation will be held Monday January 11, 2021 from 10:AM until 1:00PM at Allen Funeral Home and Crematory 4155 South Old State Road 37. Due to the ongoing restrictions with the Covid-19 pandemic her funeral will be a private family service. She will be laid to rest afterwards in the Valhalla Memory Gardens. Online condolences, photos and memories may be shared with family and friends at www;allencares.com

Thelma I. Richardson, age 98 went home to be with the Lord on Wednesday January 6, 2021 at her residence. She was born in Bloomington, Monroe County, Indiana to Mattie and Fowler Neal on June 22, 1922. She lived her entire life in the surrounding... View Obituary & Service Information

The family of Thelma I. Richardson created this Life Tributes page to make it easy to share your memories.

Thelma I. Richardson, age 98 went home to be with the Lord on...

Send flowers to the Richardson family.