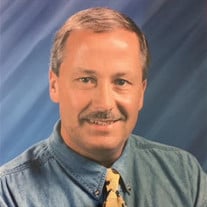 Thomas J. Harstad, 71, of Bloomington, IN passed away on Wednesday, May 12, 2021, surrounded by his loving family. He was born December 29, 1949 to Harold and Florence Harstad in the small town of Oconto, WI. Tom attended the University of Wisconsin-Oshkosh, and was drafted and stationed in Germany shortly after earning his degree in education in 1972. Upon his return home, he began working towards his Master’s degree in Administration, while serving in the Illinois National Guard and teaching fifth grade. Tom began his teaching career in Lawrenceville, Illinois, eventually becoming a principal for several elementary schools. It was here that he met and married his wife, Vicki and helped to raise her two daughters. Not only was he a loving and devoted husband and stepfather, Tom would also spend the next 30 plus years dedicated to his role as educator and administrator for Unit 20. Raised just 30 miles outside of Green Bay, he was the only boy of five children and a lifelong fan of his beloved Green Bay Packers. Having been a fan since the age of 5, Tom would often speak of waking up on his 18th birthday to find tickets to the infamous Ice Bowl of 1967. With a temperature of 13 degrees and a windchill factor of 40 below, Tom and his dad stayed snug wrapped in sleeping bags with smiles on their faces for the entire game. Tom was a joy to be around and was adored by many for his fun and kind-hearted disposition. Over the years he remained active, participating in several marathons, 10k and 5k races. He was a talented gardener, proficient story teller and lover of animals. He spent many days on the golf course trying to stay out of the sand traps and often traveled up to Wisconsin for Packer games. He and Vicki eventually settled near one of their daughters in Bloomington, Indiana in 2008. They would spend their retirement visiting with neighbors, traveling to see family, and vacationing in Door County every summer. Tom and Vicki would have celebrated their 41st wedding anniversary this July. Tom was preceded in death by his parents, Harold and Florence Harstad; sisters Mary Osmussen, Judy Derocher, and Patty Harstad; and brother-in-law Pete Derocher. He is survived by his wife, Vicki; step-children, Andrea Lagow (Shane) and Kristina Wolfe (Justin); grandson, Jackson Wolfe; sister Susan Bero (James), and several nieces and nephews and their children. Details will be available in the following weeks regarding a celebration of life ceremony to honor Tom. In lieu of flowers, please consider donating to the Wounded Warriors Project, https://communityfundraising.woundedwarriorproject.org/campaign/In-Loving-Memory-of-Thomas-J-Harstad Allen Funeral Home and Crematory 4155 South Old State Road 37 is handling the arrangements and online condolences photos and memories may be shared with family and friends and family at www.allencares.com

Thomas J. Harstad, 71, of Bloomington, IN passed away on Wednesday, May 12, 2021, surrounded by his loving family. He was born December 29, 1949 to Harold and Florence Harstad in the small town of Oconto, WI. Tom attended the University... View Obituary & Service Information

The family of Thomas J. Harstad created this Life Tributes page to make it easy to share your memories.

Thomas J. Harstad, 71, of Bloomington, IN passed away on Wednesday,...

Send flowers to the Harstad family.