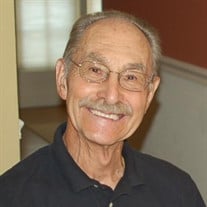 Thomas J. Rillo of Bloomington passed away on May 25, 2021. He was born August 28, 1927 in Summit, New Jersey to Theodore and Louise Rillo, who were Italian immigrants. Tom grew up in Summit and was a talented athlete - participating at the varsity level in football, basketball, and track. He was a state finalist in the javelin and discus. After high school in 1945, he entered the Army Air Corps and was trained in high altitude radar, eventually being assigned to a weather reconnaissance unit in Boca Raton, Florida. After surviving hurricanes and a plane crash, he moved on to attending Panzer College (now Montclair State University) in Montclair, New Jersey, majoring in Physical Education and Exercise Physiology. After graduation, Tom became a physical education teacher and coach at Summit and Millburn High Schools. His next teaching position was assistant professor and coach at Montclair State University, where he taught physical education classes and coached varsity soccer and wrestling. In addition, he taught outdoor education classes for teachers and accompanied college students to the New Jersey State School of Conservation for field experiences with an emphasis on outdoor teaching techniques. Later, Tom earned a master’s degree from Seton Hall University and also did graduate studies in outdoor education at New York University. His time in New York City provided him the opportunity to meet anyone from notable Greenwich Village folk singers to Joseph Pilates. Tom earned a Ph.D degree from Southern Illinois University in Outdoor Education. This led to a return to New Jersey in 1967 and a professorship at Glassboro State College (now Rowan University), along with being chair of the environmental education component of the science department. He was widely regarded as a pioneer in outdoor environmental education. In 1972, Tom accepted a full professorship at Indiana University. He taught both on campus and at Bradford Woods, the University’s outdoor center. In 1980, he began spending summers at the American Wilderness Leadership School in Jackson Hole, Wyoming, where he taught natural history, alpine ecology, outdoor teaching techniques, as well as outdoor recreation activities such as fly fishing, whitewater rafting, stress challenge activities, mountain trekking and climbing. In 1992, Tom retired from Indiana University. He continued teaching at the American Wilderness Leadership School for 5 more summers. In retirement, he was a rehab personal trainer at the Monroe County YMCA for 10 years. He also was an oblate of Saint Meinrad Archabbey in St. Meinrad, Indiana, writing for the various publications produced by the oblate office. He had a passion for writing poetry, especially with spiritual and outdoor themes. Tom was preceded in death by his wife of 61 years, Joan - who passed away in February 2018. Survivors include son Thomas and his wife Dee, son Kevin and his friend Katherine Kase Ingram, daughter Kathleen and her husband Tim Gooldy, grandson Nicholas Rillo, granddaughter Kayla Rillo, brother John Rillo, niece Jackie Fligner (Mark), niece Linda Vega (Carlos), grandnephew Michael Vega. Tom often said that his marriage to Joan was forged in heaven. Their lives were very compatible, and they assisted and supported each other in many endeavors, including 22 years of travel in retirement. Much of this travel was with the Prime Time travel program offered by Monroe Bank in Bloomington, Indiana. But they also traveled extensively on pilgrimages with the Saint Meinrad Archabbey. Tom and Joan were very active in Saint Charles Catholic Church. They both served as a Eucharistic ministers, and Tom was a lector as well. They were leaders in the Cursillo movement and worked many retreats. Tom and Joan felt that their lives were a gift from God, and they did their best to give their gift back to God through their service to others. The Rillo siblings would like to especially thank Dee Rillo for the caregiving she provided to their parents over the years. Truly above and beyond what could be expected from a daughter-in-law. Also, heartfelt thanks to Jackie Strobel, our father’s caregiver in his last year. We are so grateful that there are kind souls like both of you in this world. A Mass of Christian Burial will be held at St. Charles Borromeo Church on Monday May 31, 2021 at 1:00PM, with Father Michael Keucher presiding. The Mass will be live-streamed at https://youtu.be/JIIsTE7uLTY Visitation will also be held Monday at the church from 11:00AM to 1:00PM. Graveside services complete with Military Honors will be held Tuesday afternoon, June 1, 2021 at 3PM at Valhalla Memory Gardens. In lieu of flowers, contributions may be made in honor of Thomas J. Rillo to Saint Meinrad Archdiocese School of Theology, Saint Meinrad Archabbey in St. Meinrad, IN (saintmeinrad.org). Allen Funeral Home and Crematory 4155 South Old State Road 37 is handling the arrangements and online condolences, photos and memories may be shared with family and friends at www.allencares.com

Thomas J. Rillo of Bloomington passed away on May 25, 2021. He was born August 28, 1927 in Summit, New Jersey to Theodore and Louise Rillo, who were Italian immigrants. Tom grew up in Summit and was a talented athlete - participating at the... View Obituary & Service Information

The family of Thomas J. Rillo created this Life Tributes page to make it easy to share your memories.

Send flowers to the Rillo family.