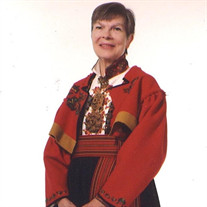 Unni Gro Rowell died on March 28, 2022 at the age of 86. She was born on December 29, 1935 in Oslo, Norway the daughter of Erling Havem, office manager for a shipping company, and Ruth Ostby, a daughter of a prominent Oslo jeweler. Her childhood years witnessed the German occupation during WW2 with its food shortages, bombing raids, and the nightly trips to the bomb shelter. Early recognition of her promise came when she awarded a scholarship to the Cathedral High School. Upon graduation, she continued her education at the University of Oslo; drawn to science, she earned first a Cand. Mag. In mathematics and chemistry, and then a Canc. Real. In geology. On graduation she joined the staff of the Oslo University Library and trained as an academic librarian. Married with two small daughters, Unni and her first husband, geologist Knut Bjorlykke, worked for the Norwegian Development Agency for two years in Kampala, Uganda, where she served as Head Librarian at Rikshospitalet, the largest research and teaching hospital in Norway. In 1973 on a trip to India, she meet Lewis Rowell, a musicologist and visiting research scholar at Banasas Hindu University in Varanasi. A year and many complications later, they were married In Honolulu, where Unni became the head Librarian at the Hawaii Institute of Geophysics. Despite the charms of Polynesua, a decision was eventually researched to move back to the U.S. mainland the couple resettled in Bloomington. Unni soon accepted a position as a researcher geologist with the Exmin Corporation in Bloomington, whose mission was to identify areas for diamond exploration in the United States. Because of the secretive, competitive nature of diamond exploration, Unni’s publishing career was cut short, but she was elected a Fellow of Geologist Society of America. The years that followed were productive and full of travels, conferences, foreign trips, mainly to Western Europe and Maine. After thirteen years at Exmin she retired but continued for several years to produce research papers and maps for future exploration. In 2013 the first signs of Alzheimer’s disease began to appear, and since 2018 she has resided at Autumn Hills in Bloomington. Unni was preceded in death by her parents, a brother, Stein Havem; and several cherished members of her extended Oslo family, especially her Aunt Marit Ostby; who was like a sister to her, and her cousin Ragnar and Odd Ostby; In America by a stepson, James Walter Rowell. Survivors in Norway include her two daughters, Anne (Bergen) and Nina (Aslo) Bjorlykke; her first husband, Knut Bjorlykke; and two special cousins, Eva Kogstad (Tore) and Per Bredo Ostby; Survivors in America include her husband of forty-five years, Lewis Rowell; Stepdaughter, Allison Lynch (Mark); and between America and Norway seven grandchildren and step grandchildren. There are no services planned at this time. Cremation Rites have been accorded Allen Funeral Home as been entrusted with the arrangements.

Unni Gro Rowell died on March 28, 2022 at the age of 86. She was born on December 29, 1935 in Oslo, Norway the daughter of Erling Havem, office manager for a shipping company, and Ruth Ostby, a daughter of a prominent Oslo jeweler. Her childhood... View Obituary & Service Information

The family of Unni Gro Rowell created this Life Tributes page to make it easy to share your memories.

Send flowers to the Rowell family.