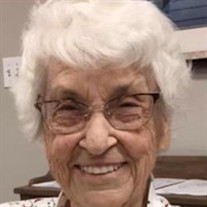 Virginia Violet Johnson was born to Jim and Dora Barger on February 18, 1923 in Bloomington, Indiana. She was one of ten children and recalled fondly the various exploits that she and her brothers and sisters got into in their early days. At 9 years of age, Virginia went to live in the country with the Rush family, where she learned to work on a farm and where she was to meet her future husband, Kenneth Hayes Johnson, who she married at age 18 and with whom she had a long and happy life until his death in 1998. Virginia went on to become a factory supervisor at Sarkes Tarzian Television and at RCA Television. She had a daughter, Beverly K. Johnson Glosser and 7 grandchildren, Alicia Wilbur and partner Jenny, Elizabeth Wilbur, Jeffery Wilbur and his wife Teresa, Andrea McConnell and her husband Orland, Christopher Wilbur and his wife Carol, Eric Wilbur and his wife Becky, and Rachel Garrett and her husband Terry. Her large family also includes 6 great grandchildren and 4 great-great grandchildren. Virginia led a full and active life, participating in in the upbringing of her grandchildren, and working in and outside of the home. She loved crocheting, embroidering, and ceramics, gardening in her flowerbeds, tending to her grandchildren, and eating Rocky Road ice cream and Hershey kisses. She had quite a green thumb and could grow anything anywhere -- when she was young, she brought a magnolia sapling from Florida back to Indiana and managed to grow it into a large and magnificent tree that was later featured in the local newspaper. She kept her home and lawn cleaned to within an inch of their lives, and always enjoyed the sights and sounds of the neighborhood children playing in her large yard. She was able to live on her own and take care of herself until she was in her middle 90s, when she travelled by air for the first time. She had a good, firm handshake and a twinkle in her eye up to the very end, when she slipped away peacefully in her sleep. She will be greatly missed, but oh, what a party there must have been in heaven when she arrived! A Mass of Christian Burial will be held Saturday, January 16, 2021 at 12Noon at St Charles Borromeo Catholic Church 2222 East Third Street, Bloomington, which will also be live-streamed on the St. Charles YouTube channel for those unable to attend. Visitation will also be held at the church on Saturday from 10:30AM until the time of the Mass at 12 Noon. Burial will follow the Mass at the Clear Creek Cemetery. Allen Funeral Home and Crematory 4155 South Old State Road 37 is handling the arrangements and online condolences, photos and memories may be shared with family and friends at www.allencares.com

Virginia Violet Johnson was born to Jim and Dora Barger on February 18, 1923 in Bloomington, Indiana. She was one of ten children and recalled fondly the various exploits that she and her brothers and sisters got into in their early days. At... View Obituary & Service Information

The family of Virginia Violet Johnson created this Life Tributes page to make it easy to share your memories.

Virginia Violet Johnson was born to Jim and Dora Barger on February...