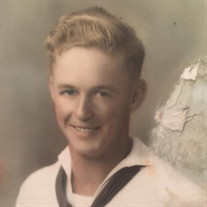 William “Ted” Fleener, Sr., 100, of Bloomington, passed away on Sunday, June 27, 2021 at Garden Villa Health Pavilion in Bedford. He was born on May 28, 1921 in Smithville, Indiana; the son of Chris C. and Hattie Susan (Rockhold) Fleener. Ted honorably served in the Navy during World War II in the South Pacific and through the Guam area. Ted married Norma L. Fleetwood on February 14, 1942. He was an iron worker and a member of Local Union 22 in Indianapolis. Ted was a member of Faith Pentecostal Assembly and Old Time Apostolic Church. He enjoyed farming, coon hunting, and fishing. Ted is survived by his children, Connie Gardner and William “Ted” (Mary Jane) Fleener, Jr.; grandchildren, Carrie (Kevin) Porter, David (Michelle) Gardner, Daniel (Reba) Gardner, Bradley (Wendy) Fleener, and Leslie Fleener; 7 great-grandchildren, and 11 great-great-grandchildren. He was preceded in death by his parents; wife, Norma Fleener; 5 brothers; 6 sisters; and grandchild, Eric Fleener; and son-in-law, Donald Gardner. A funeral service will be held at 1:00 p.m. on Friday, July 2, 2021 at Allen Funeral Home and Crematory, 4155 S. Old State Road 37, Bloomington. Burial will follow at Valhalla Memory Gardens. Visitation will be held from 5:00 p.m. – 8:00 p.m. on Thursday, July 1, 2021 at the funeral home, and again on Friday from 12:00 p.m. until the time of service. Online condolences, photos and memories may be shared with family and friends at www.allencares.com

The family of William "Ted" Fleener Sr. created this Life Tributes page to make it easy to share your memories.

Send flowers to the Fleener family.